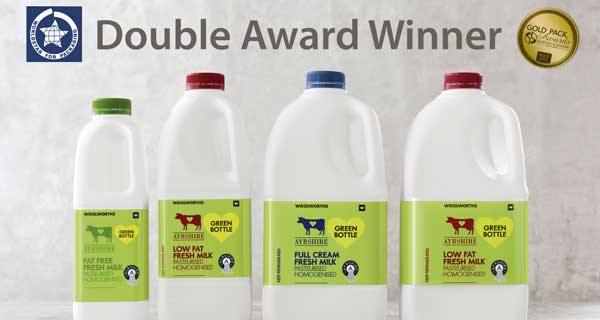 Dairypack, part of the Polyoak Group, has won double honours for its new ‘Green Milk Bottle’, developed in partnership with Woolworths; taking gold for sustainability at the recent Gold Pack Awards and an international WorldStar Award 2018.

The HDPE bottle contains 30% plant-based plastic derived from Brazilian sugar cane which is a renewable resource, and is a first for South Africa’s dairy industry.

The project was made possible through innovations in polymer production by Braskem, one of the world’s largest biopolymer producers, based in Brazil.

Thus, it provides the same quality, protection when used in food packaging, and can be seamlessly mixed with a regular fossil-fuel alternative.

Best of all, it remains 100% recyclable.

Dairypack national executive, Hekkie van der Westhuizen says, “We are proud of what our partnership with Woolworths has achieved here. Incorporating bioplastics into our raw material feedstocks is one of our many Polyoak initiatives demonstrating our commitment to producer responsibility.”

In October Polyoak Packaging joined the worldwide drive by plastics leaders to reduce the volume of plastic pellets ending up in the ocean, by signing a pledge to prevent resin pellet, flake and powder loss as part of Plastics|SA’s Operation Clean Sweep.

Explaining the importance of making a public declaration to prevent pellet loss, Polyoak Group MD, Jeremy Mackintosh says, “Polyoak is proud to be one of the country’s biggest manufacturers of plastic packaging.

“Because we use large quantities of plastic pellets and flakes daily to produce items such as plastic bottles, closures and containers, it is important that we adhere to strict environmental standards and take a leading role as a responsible producer.

“By signing the Operation Clean Sweep pledge, we want to highlight our commitment to making zero pellet loss a priority by ensuring that pellets are kept out of the natural environment, including waterways and oceans.

“We are proud to be one of the first companies signing the pledge as we believe there is a direct link between sustainability and profitability.

“Adhering to green practices such as Operation Clean Sweep is not only environmentally sound, but also makes good business sense,” Mackintosh concludes.