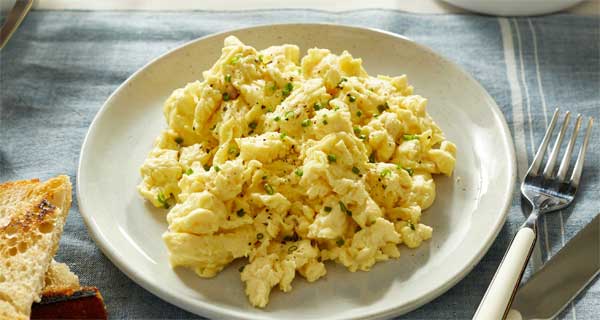 It is available in several restaurants in San Francisco and will have expanded food service distribution next year, followed by a consumer version in supermarkets.

The product has been a long time coming. CEO Josh Tetrick has had his sights set on producing an egg substitute since Hampton Creek’s launch in late-2011. But as the years rolled by and the company pushed eggless cookie dough and vegan mayonnaise onto the market, eggs never materialised.

That’s because figuring out how to mass produce a plant-based egg product that tastes, cooks, and looks like the real thing is pretty tough.

It meant learning how to mimic what happens when heat is applied to raw egg—the collision of molecules, the breaking of amino acid chains, and the tethering of proteins—turning it into a recognisable egg dish.

“Scaling things up is always a challenge for any emerging company, especially when there’s a lot of technology involved,” says Nicholas Fereday, a food industry analyst at Rabobank.

In fact, Tetrick told Quartz that figuring out the difference between what can be done in the lab versus what can be scaled to feed millions is one of the biggest lessons the company has learned.

Just Scramble’s foundational ingredient is a legume called a mung bean. It was first cultivated more than 4,000 years ago and has since become a staple food in dishes across Asia, including in India, Pakistan, China, and in Southeast Asian countries.

Hampton Creek will try the product out on companies and chefs before regular consumers, starting with Flore, a longtime San Francisco restaurant in the city’s Castro district, before expanding to other cities and food service companies next year.

Tetrick also says he’s in conversations with large quick-service restaurant chains about using the product. He hopes to roll it out in stores once it’s on solid ground in other sectors.

When it does hit the shelves of grocery stores, it will likely be in liquid form, Tetrick says.

To scale the egg product, Hampton Creek will be using an influx of new cash from venture capitalist firms Blue Horizon and Radicle Impact. The company has not disclosed the amount of capital raised by the two firms.

“Transformation of incumbent systems on a large scale is never easy, and we admire the food justice and sustainability goals Josh Tetrick and the Hampton Creek team are trying to hold fast and accomplish,” said Dan Skaff, a managing partner at Radicle Impact.

Whether the new egg substitute will cause anxiety in the wider food industry remains to be seen (the market for egg replacements is rapidly growing).

In 2015, upset by the prospect of an eggless mayonnaise on the market, the American Egg Board and Unilever tried to torpedo Hampton Creek’s ambitions. They lost those battles.

With vegan mayonnaise, cookie dough, and egg substitute under its belt, Hampton Creek is now looking to get its first cell-cultured meat to market sometime in 2018.

This type of invention, which comes from growing a handful of animal cells in a bioreactor to create meat without the need to slaughter an animal, is already causing rumbling in the meat industry.