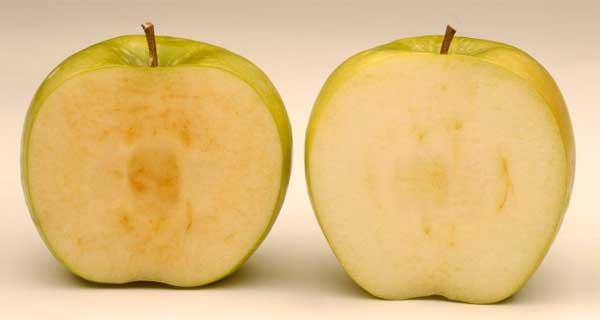 11 Oct 17 GM apples about to reach US shelves

Can genetic modification appeal to consumers? A new apple will test the market.

A US synthetic-biology conglomerate plans to begin marketing genetically modified apples this autumn but won’t label them as GMOs.

The so-called Arctic apples are genetically altered to suppress browning and may be offered for sale as bagged slices in up to 400 stores in the Midwest and Southern California, according to the company.

The launch is the first significant test of a GMO whose modification is meant to appeal to consumers, rather than help farmers increase production.

The modified Golden Delicious apples were developed by Okanagan Specialty Fruits, a privately owned company acquired for $41-million in 2015 by the Maryland biotech, Intrexon. Other divisions of that company are already marketing genetically modified salmon, cloned cattle, and self-destructing mosquitoes. 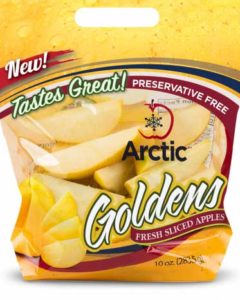 The company plans to sell the apples as bags of pre-sliced fruit but say they will not be labelled as “produced with genetic engineering” and will not come with any other packaging identifying them as GMOs.

Instead, as allowed under a 2016 labelling law, there will be a QR code that links to a web page with detailed information on how the apples were made.

“We didn’t want put ‘GMO’ and a skull and crossbones on the package,” Neal Carter, Okanagan’s founder, said during a presentation in San Francisco.

The GM apple is notable partly because Carter, an apple grower and farming innovator, independently developed it and won regulatory approval to sell it.

Most GMOs have been developed and marketed as seeds by large corporations like Monsanto or DuPont and involve large-acre crops like soybeans and corn.

Using a technique called gene silencing, Carter and his research team engineered the apple’s DNA to produce less polyphenol oxidase, or PPO, the enzyme that causes the flesh to turn brown. Carter says slices of the engineered apples can stay free of browning as long as three weeks.

To some, genetic slowing of the browning process could seem like a solution in search of a problem. Commercial apple slices are already preserved with a mixture of calcium and vitamin C, which keeps them from browning long enough to be ordered via Amazon. At home, many cooks know a squirt of lemon juice does the trick, at least for a few hours.

Groups opposing GMOs have protested the introduction of Okanagan’s apples and pressured food companies including Burger King not to sell them.

Friends of the Earth told the Independent that the Arctic apple is “understudied, unlabelled, and unnecessary.” Because of widespread opposition, genetically modified foods are subject to an array of labelling rules and even outright bans around the world.

But David Zilberman, a professor of agricultural and resource economics at the University of California, Berkeley, says the apple doesn’t present any health risks and that Okanagan’s decision for discreet labelling is justified.

“Cigarettes have a huge [label], but GMO is not cigarettes; it’s not poison,” he says. “There is nothing wrong with this from any perspective. Let’s see what happens. We may

Carter, who is eager to debate critics, says non-browning fruit could increase apple sales and reduce waste. About 45% of fruits and vegetables grown are thrown away according to the UN. The waste occurs during picking or shipping, by retailers, or at the hands of picky children and adults.

Carter’s bigger challenge will be taking a bite out of the apple market. He says the number of acres planted with Arctic trees now stands at 250, and he expects to reach at least 1,400 by 2019. There are approximately 325,000 acres of apple trees in the US.

Carter declined to disclose the price of the sliced fruit bags, but packages of conventional apple slices sell for about $3 to $5 each. “These next couple of months, we’re going to be learning a lot,” he says. “It’s scary from that perspective.”

Gene-altered apples get US approval