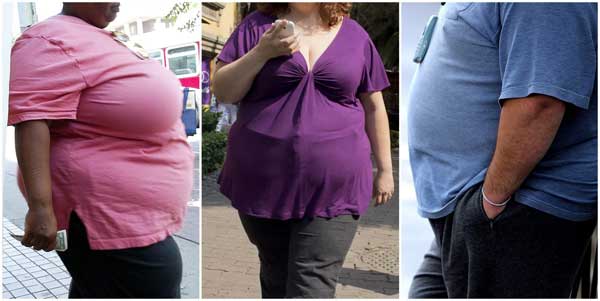 Globally, more than two billion children and adults suffer from health problems related to being overweight or obese, and an increasing percentage of people die from these health conditions, according to a new study. This equates to one-third of the world’s population carrying excess weight, fueled by urbanisation, poor diets and reduced physical activity. South Africa does not look pretty….

Three out of every 10 adult people in South Africa are obese with the number of overweight folk – especially Black women – continuing to rise.

This is according to a global research report (co-authored by Associate Professor Benn Sartorius of Public Health Medicine at UKZN) and published in the prestigious New England Journal of Medicine.

The findings represent “a growing and disturbing global public health crisis,” according to the authors of the paper published June 12, 2017. In South Africa, 10 million adults, or 30.2%, are considered obese. Additionally, 1.6 million South African children are obese, comprising 8.8% of all children in South Africa.

The US has the greatest percentage of obese children and young adults, at 13%, while Egypt led in terms of adult obesity, with almost 35%, among the 195 countries and territories included in the study.

And people are dying even though they are not technically considered obese, researchers found. Of the 4.0 million deaths attributed to excess body weight in 2015, nearly 40% occurred among people whose body mass index (BMI) fell below the threshold considered “obese”.

“People who shrug off weight gain do so at their own risk – risk of cardiovascular disease, diabetes, cancer, and other life-threatening conditions,” said Dr Christopher Murray, an author on the study and Director of the Institute for Health Metrics and Evaluation (IHME) at the University of Washington.

The study, which spans 195 countries and territories from 1980 through 2015, was released at the annual EAT Stockholm Food Forum, which aims to create a healthier, more sustainable food system.

It is based on data from the most recent Global Burden of Disease study (GBD), a systematic, scientific effort to quantify the magnitude of health loss from all major diseases, injuries, and risk factors by age, sex, and population. With more than 2,300 collaborators in 133 countries, the GBD study examines 300-plus diseases and injuries.

The paper includes analyses of other studies on the effects of excess weight and potential links between high BMI and cancers of the esophagus, colon and rectum, liver, gallbladder and biliary tract, pancreas, breast, uterus, ovary, kidney, and thyroid, as well as leukemia. IHME is committed to producing more in-depth studies on the implications of obesity and overweight, including through a new partnership with the United Nations, according to Dr Murray.

He announced at the forum a new agreement between IHME and the UN’s Food and Agriculture Organization (FAO) to exchange data, knowledge, and expertise. The goal is to elevate the world’s collective understanding of what is driving “the current global epidemic of disease” related to high body weight.

The UN’s “Decade of Action on Nutrition” is an initiative covering 2016–2025 to eradicate hunger, end malnutrition in all its forms (undernutrition, micronutrient deficiencies, overweight or obesity), and reduce the burden of diet-related non-communicable diseases in all age groups.

In 2015, excess weight affected 2.2 billion children and adults worldwide, or 30% of all people. This includes nearly 108 million children and more than 600 million adults with BMI exceeding 30, the threshold for obesity, according to the study.

Among the 20 most populous countries, the highest level of obesity among children and young adults was in the US at nearly 13%; Egypt topped the list for adult obesity at about 35%. Lowest rates were in Bangladesh and Vietnam, respectively, at 1%.

“Excess body weight is one of the most challenging public health problems of our time, affecting nearly one in every three people,” said Dr. Ashkan Afshin, the paper’s lead author and an Assistant Professor of Global Health at IHME.

“Over the past decade, numerous interventions have been evaluated, but very little evidence exists about their long-term effectiveness. Over the next 10 years, we will closely with the FAO in monitoring and evaluating the progress of countries in controlling overweight and obesity. Moreover, we will share data and findings with scientists, policymakers, and other stakeholders seeking evidence-based strategies to address this problem.”

“South Africa’s current increase in BMI and overweight/obesity prevalence is of major concern and is much higher than most other global settings. The current and downstream health implications of this will be more than the already overburdened healthcare system can deal with if we do not act more vigorously and decisively. This is not to mention the societal and economic impacts of this epidemic.

“It is hoped that the South African National Department of Health’s strategic plan to help prevent and control obesity and related non-communicable disease will yield positive results.

“The recent sugar taxation legislation is aimed at reducing body mass at a population level and thus contribute to the reduction of both the burden of overweight/obesity as well as the non-communicable disease consequences. Stricter food labelling and advertising regulations and further regulations for trans fats are other elements of this proposed strategic plan.”

Read the original article in the NEJM here