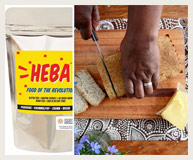 By way of history, in November 2015, Banting Blvd, an affiliate of The Noakes Foundation, launched an alternative to common South African staple foods, such as high-carb bread and maize meal pap.

Called HEBA, shorted from “healthy Banting”, it is a low-carb and versatile product made from ground seeds and coconut flour.

With a focus on affordability, it can be used to make pap, bread or krummelpap but has captured the imagination of Banters who are using it to create low-carb versions of their favourite traditional meals such as umvubo, suji and vetkoek.

“We think this product can make a real difference. It has a touch of genius,” tweeted Prof Tim Noakes, the father of LCHF eating in South Africa, and recognised globally for his work in rediscovering, researching and evangelising the science behind the modern high-carb diet as a cause of insulin resistance, which in turn has sprouted the epidemic of diseases that make up the metabolic syndrome ie high blood pressure, heart disease, obesity, diabetes, fatty liver disease, cancer etc.

In August this year HEBA received first place for “Most Innovative Ingredient” at the Global Food Industry Awards, at the binennial IUFoST congress in Dublin.

IUFoST or International Union of Food Science and Technology, represents over 300 000 members across 65 countries making it the world voice of the industry.

HEBA was developed with local identity in mind stemming from South Africa’s rich diversity of tradition, ethnicity, culture and religion.

“For individuals suffering from conditions such as diabetes or obesity, healthy lifestyles can’t be a luxury,” explained Van Niekerk,.

“Diets most often unravel at social occasions and celebrations where food is central,” says Lizanne van Niekerk, her daughter and business partner who conceptualised HEBA.

“Our dream was that HEBA, and all our Banting Blvd products, would allow people to stay true to their identity and participate in social situations without ever having to compromise their health.”