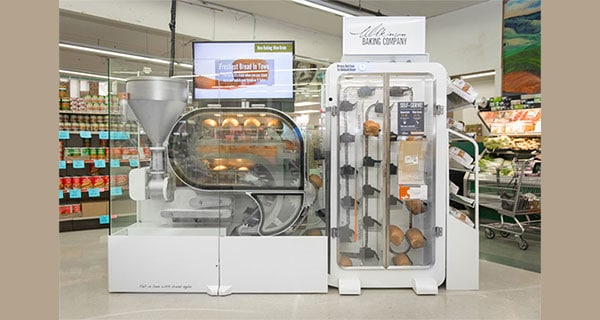 The BreadBot turns flour into loaves all on its own, producing bread which is fresh, healthy, preservative-free and eco-friendly in comparison to center aisle bread.

The system is aimed at re-establishing an “emotional connection with the shopper” that has been lost in an age of industrial food production.

“Believe it or not, the last time there was a major innovation in the way bread was made was 1912, with sliced bread,” Randall Wilkinson, CEO of The Wilkinson Baking Company, tells PackagingInsights.

“In the age of home delivery, the BreadBot attracts consumers back to the store. Consumers want fresh, delicious bread that is produced with theatre and engagement,” he says.

“The commercial bread category at retail has, for many years, been stagnant if not declining. Yet, with the announcement of the BreadBot at CES 2019, social media exploded with interest in the BreadBot. We believe this reflects the pent up demand for fresh, tasty bread,” adds Wilkinson.

The BreadBot mixes, forms, proofs, bakes and cools ten loaves of bread per hour – all on its own – and is capable of making most varieties of bread that require dry ingredients. This includes white, wheat, whole wheat, nine grain, sourdough and honey oat. The bread can also be made organic.

Retailers using The BreadBot can benefit from a potential 20-fold lift in bottom line profit margins through the elimination of the costly current bread distribution process, as well as benefiting from increased consumer interest and maximized employee productivity, the company says.

Grocers can get a head start on their daily production demands by scheduling The BreadBot to start baking hours before they open. Additionally, The BreadBot is disrupting commercial baking and helping the environment through the elimination of brick and mortar facilities and distribution overhead, the company also states.

“The extended time requirements of the central factory’s model for distribution means that preservatives are added to manufactured bread to ensure greater shelf-life. Production within the grocery store, which the BreadBot enables, serves to eliminate the need for those preservatives,” says Wilkinson.

“Excess sugar is also often added to compensate for the loss of bread’s initial aromatic flavours, which diminish in the first 2-4 days. The BreadBot’s preservative-free loaves maintain delicious flavour and avoid the need for excess added sugar,” he says.

“No matter how sophisticated automation becomes, endless product categories will have room for both sides of the coin: the fast/cheap/scalable version and the slow/expensive/limited batch. As the consumer landscape diverges further in the coming years, are you plotting a clear enough course in either direction? Risk the muddled middle at your peril!” Commentary on BreadBot by TrendWatching.com

How The BreadBot measures up:

20 years in the making

The Wilkinson Baking Company explains that the BreadBot took 20 years to develop. The major challenge was “mastering the consistent management of a sometimes quirky biological process by a mechanical device,” continues Wilkinson.

“Add to that the early lack of sophisticated sensors, actuators and PLCs needed to support our vision for the BreadBot and you’ll understand the time it has taken to complete the project,” the says.

The machine is making constant adjustments on a millisecond basis from mixer speed development of the loaf, forming time and speed, proofer temp, proofer humidity and oven temperatures…..