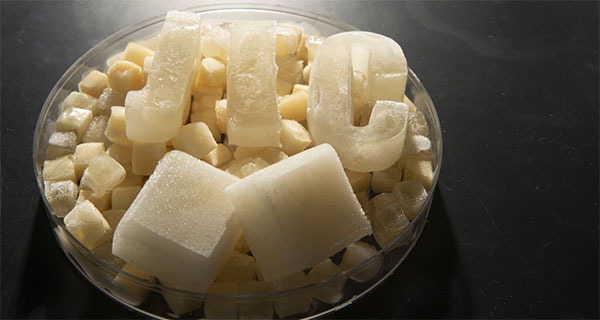 When it comes to keeping things cold, ice cubes are hard to beat … although the things do melt, never to be used again. Scientists have set about addressing that limitation, with reusable water-based “jelly ice” or hydrogel cubes that hold their shape at all temperatures.

Developed by a team at the University of California – Davis, the cubes are made of a hydrogel consisting of 10 percent protein-derived gelatine and 90 percent water.

The material can be cut into any size or shape needed. It’s transparent and jiggly at room temperature, but becomes hard and opaque once frozen. The cubes made from it can be used for applications such as keeping perishable foods cold while in storage or in transit … just like regular ice cubes.

Unlike such cubes, however, the hydrogel cubes won’t melt into a puddle as the ice within them thaws. Instead, the water remains within the hydrogel matrix, for subsequent refreezing and reuse.

In fact, each cube can reportedly be reused 12 times without degradation – just a simple rinsing-off in water or diluted bleach is required between each use.

And because the cubes contain no synthetic compounds, they can be composted once discarded. In order to make them even more eco-friendly, the scientists are now looking into using agricultural waste as a base for the gelatine.

Along with saving the water that would be required to keep making new ice cubes, the jelly ice cubes should additionally help reduce cross-contamination in facilities such as food processing plants. This is because unlike regular ice cubes, they don’t melt into the form of bacteria-carrying liquid water that flows from one food item to another.

A paper on the research – which is being led by Prof Gang Sun and PhD graduate student Jiahan Zou – was recently published in the journal Sustainable Chemistry & Engineering.