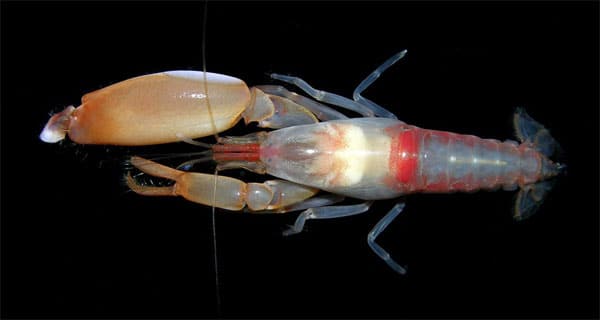 28 Feb 18 How the food industry is using cavitation, the ocean’s most powerful punch

Cavitation produces a bubble that rapidly collapses and becomes hotter than the sun’s surface. The mantis shrimp uses it, and now so are food and drink firms, to improve flavours — from yoghurt to beer.

Throughout history, being on the receiving end of anything involving cavitation, a miniscule underwater implosion, has been bad news.

Millions of years before humans discovered cavitation — and promptly began avoiding it, given its tendency to chew up machinery — the phenomenon has provided the shockwave and awe behind a punch so ridiculously violent that it’s made the mantis shrimp a honey badger-esque Internet mascot.

Now, a slew of companies are co-opting the phenomenon  to process food and beverages from yoghurt to beer.

Cavitation is when low pressure in a liquid produces a bubble that rapidly collapses, and heats up to 20,000 Kelvin — hotter than the sun’s surface.

This usually releases a flash of light called sonoluminescence, which physicists still don’t understand. Some physicists even theorise that cavitation bubbles could get hot enough to power nuclear fusion.

Mantis shrimp’s club-like appendages generate these bubbles by punching with the acceleration of a .22 calibre bullet. When they hit their prey’s shell, they create a low-pressure area, vaporising water and forming a cavitation bubble that collapses with a shockwave with up to 280 percent of the force of the original punch.

Pistol shrimp, the world’s loudest animal, snap their claws so quickly that they create a low-pressure jet that causes cavitation bubbles, stunning prey.

We humans are newcomers to cavitation. We never properly observed it until 1895, on torpedo boat propellers. And, save for using cavitation to reduce drag on torpedoes, engineers have generally designed equipment to avoid it like the plague.

According to Doug Mancosky, chief science officer of Hydro Dynamics, which designs cavitation technology, when 15 years ago he started trying convince biofuel and petroleum manufacturers that cavitation could be used to refine their products, they thought he was crazy.

Now, his company is at the forefront of a burgeoning sector of firms selling cavitation technology to food and beverage manufacturers.

Their first foray into the food market, in 2013, was when Hydro Dynamics discovered that cavitation could simplify egg pasteurisation. According to Mancosky, their tech, which uses a hole-filled rotor (picture the inside of a washing machine) to generate cavitation bubbles, could heat from within the liquid.

“The surfaces of our devices actually stay cooler than the liquid flowing through it” so eggs couldn’t harden like they did on hot industrial equipment. And since companies could tune the intensity of cavitation, they could pasteurise and mix eggs without breaking apart too many proteins in them.

Since then, Hydro Dynamics and their licensees have branched out into processing pet food and dairy products — such as making fluffier, aerated yoghurt products and milk.

More recently, they’ve begun using cavitation bubbles to unravel and condense proteins in low-fat whey drinks to a size where they produce a richer, fat-like mouthfeel. They aren’t alone in the dairy market, though.

Among others, Yoplait and Valio have also patented in-house methods of using cavitation to process dairy products in recent years.


However, since 2015 — when an Italian National Research Council team published pioneering research on using cavitation to brew beer — cavitation has been making the most waves in the beverage industry.

According to one scientist from that research team, Francesco Meneguzzi, they found that cavitation processed and converted more of the starch in barley to brewable sugars — without having to germinate it first — in less time, at lower temperatures.

MIT’s Technology Review hailed the team’s innovation, and since then, cavitation has become a burgeoning fascination of craft brewers.

Hydro Dynamics, for example, found that as cavitation bubbles formed and collapsed, they pushed and pulled wort through hops “like a plunger”, Mancosky says, improving flavour extraction. Two years later, they have partnerships with a slew of craft breweries, including Anchor Brewing and Cabarrus.


“One application leads to another,” Mancosky says. Cabarrus, which makes a beer infused with cold brew coffee, asked him if they could use cavitation to extract more flavour from coffee.

“We said ‘Yeah, it should help, the same way it helps extract more flavour from hops. They fired it up, and next thing you know, they’re able to reduce their cold brewing time by 80 percent.”

The transition to using cavitation technology has posed some technical challenges for brewers, though. As Anchor Brewmaster Scott Ungermann says, “cavitation can drive extraction of undesirable flavours as well as the ones that we are looking for … with so many other variables it is very difficult to dial in exactly the flavour profile.”

Ryan Cottongim of Witches Brew, another craft brewer that works with Hydro Dynamics, seconds Ungermann’s sentiments, saying that trying to integrate new technology while trying to keep brews consistent has been difficult.

Moreover, while Cottingham has enjoyed more efficiently extracting extra hop flavour, “at some point you hit that saturation point where you’re not going to get any more from this”.


Nevertheless, cavitation’s alcoholic applications go even further. It can age liquor and wines by acting a catalyst. Cavitation can effectively accelerate barrel aging by extracting flavour from charred wood chips — while using the char as a carbon filter to trap impurities.

In the past two years, Hydro Dynamics has sold equipment to several wineries and distilleries for aging. And, two companies, Cavitation Technologies and Sonn Beverage Systems, are targeting consumers with household devices that age wine and spirits.

Sonn, however, uses ultrasound cavitation, a method of generating cavitation with soundwaves most well known for its use in breaking up kidney stones.

Sonn CEO Denis Londry says they opted for ultrasound because “unlike other ways of generating cavitation, nothing is pressurised”. The whole thing can be an open container with few moving parts — suitable for a countertop, if not a winery.

Much like Hydro Dynamics has, Londry says Sonn is also aiming to expand into the tea and coffee markets — both of which are markets eager to improve their flavour extraction technology. In fact, one cavitation technology firm confirms that they’re testing cold brewing equipment with one of the world’s largest coffee chains.

But the edible applications of cavitation don’t stop there. The same phenomenon behind the most powerful punch makes for a better blender, catalyzes sought-after reactions, and can “neutralise a large spectrum of spoiling and harmful microbes,” such as bacteria and waterborne viruses, according to Meneguzzo, “much more effectively and efficiently than most other technologies”.

After millions of years of punctuating the most destructive attacks the ocean has ever seen, the cavitation bubble has a bright future in making humans’ food and drinks safer and tastier.