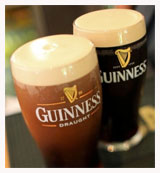 Lisa Ronquest is one of South Africa’s top young food scientists, now transferred to The Netherlands in a global food R&D role by Mars. She’s been sharing her impressions and insights with FOODStuff SA readers in a regular blog, and we’re proud here to publish the tenth episode on her big move.

This time, Lisa explores potatoes and Guinness, what else, in Dublin!

So we head to Dublin, Ireland to celebrate Springs’ arrival. What visit would be complete without a visit to the Guinness storehouse? But first we explore the famine ships where the story of the Irish Potato Famine is told.

A far less slick operation than the Guinness museum, but a worthwhile story to hear nonetheless. Told by an old, large, wheezing Irishman, it all started in 1845 when a third of Ireland’s population were dependent on potato crops, eating 6-7kg/day.

They ate potatoes with butter milk which added protein, fat and vitamins to the meal. This diet made these Irish farm workers extremely strong and tall. Until the famine or great hunger came, that is.

Potato blight, as the plant disease is called, was caused by a fungus that destroyed the potato crop within 48 hours. With the Irish so dependent on this crop it had a dramatic and fundamental impact on the Irish population. A million people died and another million emigrated in just seven years.

Imports of corn by the government had limited impact on slowing the starvation due to ineffective distribution and cooking know-how.

So the landlords of the potato farms started to evict their tenants sending them on ‘famine ships’ to the United States. The conditions were so poor on these famine ships, almost 50 000 died while at sea – hence the term ‘coffin ships’ as they were often referred to.

The sensorial genius of Guinness

From this dire history of how man’s dependence on a single crop from a single region can ultimately be his downfall, we move to a story of four simple ingredients have been turned into a global success. It’s a story of Irishman, Arthur Guinness – a bold, visionary thinker and philanthropist.

It all started at St James Gate Brewery in Dublin, which first started brewing in 1759. We visited the Guinness Storehouse where the first floor of the museum is dedicated to those four ingredients that make Guinness great: water, hops, barley and yeast.

Water is sourced specifically from the Wicklow mountains nearby and yeast is carried over from batch to batch for consistency purposes. It’s also only grown in St James gateand is safely locked away in a safe there, or so the legend goes.

The kids certainly enjoyed this part of the museum where a pit full of barley, laid a foot deep was accessible to visitors. They spent most of their time making face imprints in the grain while we read about the facts and figures of each ingredient.

The Guiness brewing process consists of mashing, boiling, fermenting and maturating of these four ingredients. As we moved through the museum our senses were truly engaged with the unique Guinness experience. I will never forget walking into the all-white tasting room where aroma columns release beer esters into the air so we could smell each component that makes up Guinness.

The barley, which is either malted, un-malted or roasted. The malted barley adds the sweetness on the tip of tongue. Some of this malted barley is roasted giving the dark chocolate or coffee taste in the middle of the tongue.

The hops, which is only grown in two regions of the world between 35⁰ and 55⁰ north and south of the equator, gives a floral aroma perceived as bitter on the back of the tongue.

Visually, a well poured pint of Guinness has a firm foam head. Contrary to popular belief and in contrast to the colloquial name it’s often referred to as, ’the black stuff’, is actually ruby red in colour. This is thanks to the roasted barley.

The foam head is created by a widget in cans or bottles using nitrogen, or by the process of drawing a pint from a keg using nitrogen or a mix of carbon dioxide and nitrogen.

Guinness pioneered the use of nitrogen as it creates a firm head with very small bubbles while reducing the acidic taste often produced by using carbon dioxide alone. Nitrogen settles on the top of the beer and protects the flavours from oxidising.

One sip is a truly a full sensorial experience!

Unlike the dependence on one crop grown in one region, today Guinness is made in over 50 countries and delivers the same unique taste whether you drink it in Ireland or South Africa.

This is a real testament to the global nature of the manufacture and selling of global food and beverage brands all over the world. I can certainly feel it in my global role at Mars Food that, once there is a winning formula, there is much growth to be gained in codifying and maintaining what works and expanding into new geographies.

After a tiring day of sight-seeing we came across a lovely old Irish pub with high ceilings, wooden features and carpeted walls to enjoy yet another of the famous Irish black stuff while munching fried potatoes! 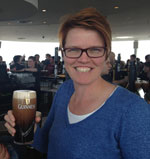 Lisa Ronquest is currently Head of Product Development – Global Food R&D at Mars Inc, based in The Netherlands. The intention of this column is to be both a personal and professional account of a South African food scientist exploring life and work in a developed market.