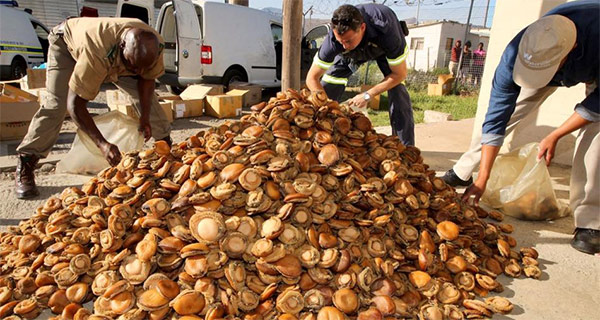 Posted at Thursday, May 9th, 2019 h in Latest SA News by Brenda 0 Comments

Missing beehives, hijacked food trucks and notorious perlemoen smugglers, these are few of the infamous South African food heists to know about, worth millions of rands.

Food24 journalist, Julie Donald, recently investigated South African foods and edible treasures that have been stolen and what the black market is like for such foods.

What started out as a light-hearted look at what foods are stolen, took her “down a dark rabbit hole of organised crime and environmental disregard”:

Between 1987 and 2000 Arnold Bengis owned and ran a fishing company called Hout Bay Fishing, illegally fishing and exporting crayfish to the US to an estimated value of R1.29-billion (yes you read that right) and decimating the local crayfish population.

Bengis was ordered to pay R479-million in the New York Southern District Court and sentenced to four years in prison. This amount was later reduced to just over R100-million (to be paid to South Africa via the Jersey Islands and the US Department of Justice). Read more here…

It is unclear if the 81-year-old has ponied up the cash and he currently lives in Israel, seemingly escaping any consequences for his actions.

Organised macadamia theft a growing ‘business’ in SA, with the most expensive nut on the market is being funnelled into Zimbabwe or sold to syndicates in Mpumalanga at a rate of about R200-million per year.

In 2017, the Macadamia Growers’ Association (SAMAC) put the damage to the industry at “a conservative figure of 2,120 tons of macadamias estimated to be stolen annually to the value of R146,3-million.” This figure accounts for direct losses; when indirect losses are factored in, SAMAC reckons that the damage comes to more than R200-million.

One of the most alarming aspects of this, says SAMAC, is that the theft is organised through established supply channels and the nuts are entering the legitimate market.

These illegally packed nuts (when not handled properly) are at high risk of Salmonella contamination and have the highest recall rate of all the nuts by the US FDA.

There have also been reports of machete-wielding thieves targeting Zimbabwean macadamia farms, leading to safety concerns for farmers and farm workers.

The perlemoen black market is moving about R628-million of South African perlemoen per year and appears to be run by a bunch of dim-witted individuals.

One couple was arrested in Mowbray, Cape Town, when they reported a burglary (of abalone) from their home, SAPS located approximately R2.8-million worth of abalone on the premises.

Another man was arrested in Swellendam for driving a stolen vehicle AND carrying about R3.8-million perlemoen.

Abalone-kingpin, Morne Blignaut, was sentenced to 20 years in prison for an estimated R30-million rand perlemoen poaching industry in Sept 2018 by the Port Elizabeth High Court.

The high price of honey has villains mixing in syrup to make it go further, but more recently whole hives are being stolen resulting in R100 000’s worth of losses to beekeepers.

90% of plants are pollinated by bees and the relationship between beekeepers and fruit growers is essential for both of their survival.

Unscrupulous thieves take the whole hive, cut out the comb and harvest the honey to sell effectively destroying the hive.

This is also a huge problem in California where 80% of the world’s almonds are grown in the US state’s Central Valley. Honeybees trucked in by the billions to pollinate the trees are as essential as rain and sunshine. Without them, only a fraction of the acreage under self-pollinating almond varieties would produce nuts.

The minute food is loaded into a truck for transport it becomes a target for racketeers.

Also targeted are trucks with frozen meat exiting the Durban harbour, beer and soft drink trucks. The full impact of these sorts of crimes are difficult to estimate, but it does contribute to fraudulent food items and black-market meat which may have been incorrectly stored and therefore dangerous to eat.