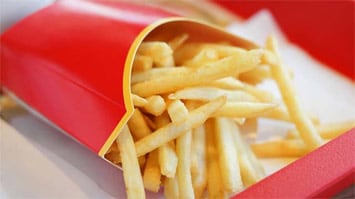 The greaseproof packaging holding your burger and fries may contain potentially harmful fluorinated chemicals that can leach into food, according to a new research out of the University of Notre Dame in the US.


Grease-resistant wrappers treated with the same chemicals used in stain-resistant products like carpets as well as floor wax were found in significant numbers at a variety of fast-food restaurants.

The compounds in question here are called per- and polyfluoroalkyl substances (PFASs) and previous studies have linked these fluorinated substances to everything from kidney and testicular cancer to low birth weight, decreased sperm quality and thyroid disease.

Studies have also shown that when food is touched by paper containing the compounds, they can migrate into the meal.

In the current study, Graham Peaslee, a professor of experimental nuclear physics in the College of Science at the University of Notre Dame analyzed over 400 different kinds of food wrappers from 27 different fast-food chains in America including McDonald’s, Burger King, Chipotle and Starbucks. The samples were collected from in and around five different US cities.

Peaslee and his team found that PFASs were found in 56 percent of the wrappers used for desserts and breads, 38 percent of sandwich and burger wrappers and 20 percent in paperboard, the material that is often used to create burger boxes and other fast-food containers.

“Briefly, an accelerated beam of protons is used to bombard a surface of any solid material, and any fluorine nuclei within the sample will be excited and emit characteristic gamma-rays that can be measured quantitatively,” Peaslee shared with New Atlas.

“The number of gamma-rays emitted is proportional to the total amount of fluorine within the sample.”

PFASs have a long half-life in the human body, meaning that they are prone to sticking around awhile, which makes them particularly menacing. This is especially true when it comes to children, one-third of whom, according to the CDC, eat fast food daily, with 12.4 percent of the overall calories consumed by children coming from the fare.

The researchers say that they contacted the restaurants examined in the studies regarding their use and policies on fluorinated products and only heard back from two of them, both of whom stated that they believed their packaging was free of PFASs.

“While it is difficult to draw conclusions on the basis of so few responses, this suggest a lack of knowledge in the fast food industry about the use of fluorinated packaging,” conclude the researchers in their paper, which was published in the journal, Environmental Science & Technology Letters.