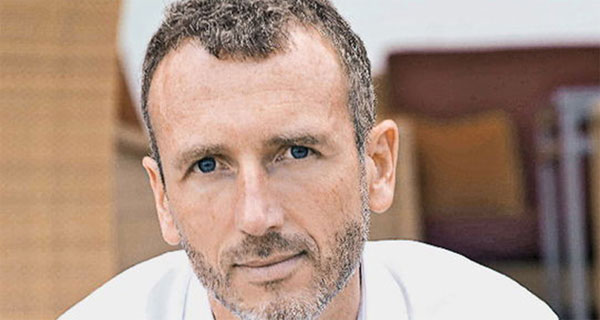 EMMANUEL Faber is talking about a revolution. Fittingly, we are just a few miles from the Place de la Bastille in Paris. The boss of French food giant Danone leans across the table in his sunlit office on Boulevard Haussmann, a radical glint in his grey-blue eyes.

“We have to adjust,” the 54-year-old says in flawless English. “Whether we move fast enough or whether we move too fast is really the question I have most in my mind.”

His cause is no less than improving the world’s health and reducing poverty by helping people to eat and drink better. We are hard-wired to salt, fat and sugar, he adds. If big businesses fail to act, consumers will suffer the consequences. It keeps him awake at night.

This is deep stuff from a man whose main job is to sell yoghurt — a product not renowned for lacking sugar. Danone owns the Actimel and Activia brands, as well as Evian and Volvic mineral water and the baby food label, Cow & Gate. It made revenue of €24.7bn (£21.5bn) last year and sold its products in more than 130 countries.

The scale gives Faber a platform from which to pontificate on issues of greater significance than Danone’s next set of quarterly results.

It is just as well, because he has a lot to talk about. From plastic waste to France’s growing prominence on the international stage, and even the impact of Brexit on the waistline of the average Brit, Faber is not short of opinions. All are delivered with a lack of irony that escapes most British bosses.

The earnestness allows him to do things FTSE chiefs would not dare to do. Last week, Danone unveiled plans to give all 100,000 of its employees across the world a share combined with an annual incentive payment based on a multiple of the value of the dividend.

At the same time, Faber announced a set of long-term goals — aligned to the  UN’s sustainable development agenda — designed to see the business through to 2030.

Vision versus a plan

How is it possible for a listed company to plan that far ahead? “I think it’s very important that we develop a vision, which is a very different thing from a plan,” he says, intensely.

The ability to look so far into the future is perhaps a reflection of Danone’s stability when it comes to picking leaders. Faber is only the third chief executive since the company was formed in 1972 through the merger of a yoghurt producer and a glassmaker.

He is the first to come from outside the founding Riboud family. Faber joined after spells at the management consultant Bain and Barings Bank. In his two decades of service, Danone has jettisoned brands including HP Sauce, Lea & Perrins and Kronenbourg beer to focus on dairy products, water and baby food.

He escapes the pressures of corporate life by going rock climbing in the French Alps. It has left him lean and athletic. The fact others are not in such rude health appears to inform many of Faber’s business decisions.

He thinks consumers have become “disconnected” from food and are no longer aware of what their dietary choices mean for their wellbeing. In a speech in Berlin last year, he cited a report showing that 15m Americans believed chocolate milk came from brown cows. The audience laughed. Faber did not. “It is pathetic,” he snapped.

That leads us, somewhat circuitously, to Brexit. Faber is confident that Danone will handle any economic fallout. He is far more worried about people in Britain having to pay more for fresh fruit and vegetables because import costs will rise.

“I think the health situation, the obesity concerns, the diabetes concerns will be even bigger with Brexit because the UK is not self-sufficient in terms of agriculture today,” he says.

Brexit will make you fatter is a view not likely to go down well in some quarters. Besides, it is premature at best, given that nothing has yet been decided about trading arrangements after we leave the EU.

Faber, however, presses his point and says Brexit will “run the risk of a degradation of the overall health, the nutritional status of people in the UK”, because poorer shoppers will be forced to buy cheap junk food. Maybe he knows something about the talks that we don’t.

Since starting in the top job four years ago, Faber has not been afraid to make some big calls. He purged the executive committee, reducing its number from 14 to 6 and ensuring an equal gender split. Last year he paid $12.5bn (£9bn) for WhiteWave, an American organic food specialist.

Faber’s confidence fits well into the wider resurgence of France as an international force. Walking through Paris in the sunshine last week, it was hard not to feel that the country is having a moment. On the same day, presidents Trump and Macron were deepening their bromance in Washington, complete with prolonged handshakes and bizarre photo calls.

Does he know Macron? Faber smiles enigmatically and admits he does, but will not be drawn much further. He says he hopes France is becoming a better place to do business.

“I think it [the government] sees a great opportunity for the continued transformation of France and the better integration of business into the overall French society project.”

More interestingly, Faber sees France’s future at the heart of doing “business from a European perspective”, which he views as distinct “from the way the Anglo Saxons or American people look at it” on the one hand and “our Chinese friends” on the other.

He supports a new companies law being considered by the Macron regime, which will provide greater labour market flexibility. “Here in the middle, we have been closely co-operating on making this law possible and it will be very good for France in the future,” he says.

As chairman and chief executive of one of his country’s biggest companies, Faber has been thrust into the business elite. It does not sit that comfortably.

Whereas some of his rivals — notably Unilever’s Paul Polman, another consumer goods company boss who has long campaigned on environmental issues — are regulars at Davos and other cosy corporate gatherings, Faber tries to avoid such jamborees.

Instead, he has slept in refugee camps, visited the slums of Delhi and attended anti-globalisation summits. “I have never been to Davos,” he says.

Still, leading a €44bn company comes with certain responsibilities. As one of the world’s biggest users of plastics, Danone contributes to the pollution clogging the oceans.

Selling water in single-use plastic bottles looks increasingly out of step with public opinion — not to mention Danone’s commitment to sustainability. According to data provider Euromonitor, 480bn plastic bottles were sold in 2016 — less than half were collected for recycling and only 7% made into new bottles.

Faber quickly points out that Evian’s bottles are 100% recyclable and carbon-neutral. That does not stop them finding their way into the sea, though.

“No, it does not,” he concedes. He says the use of plastics will fall as a new generation of packaging is developed, but to solve the problem, rival companies must work together.

There is some evidence this is happening already. Danone works with Nestlé to research sustainable packaging. Both companies signed the UK Plastics Pact last week, agreeing to reduce plastics waste over the next seven years.

What will Danone look like in 2025? Faber has decentralised much decision-making and says the business is made up of 30 individual entities. His conviction that change is coming goes some way beyond altering the corporate structure.

“I’m convinced of the fact that the value of companies in the future will not be related to only dollar metrics,” he says.

The shift is already happening. Danone has been one of the most enthusiastic adopters of the B Corp movement, a certification that is the business equivalent of the Fairtrade label on shop shelves.

Earlier this month, Danone’s north American subsidiary became the world’s biggest business to receive B Corp certification, which guarantees it will consider the interests of employees, consumers and the environment — as well as shareholders — when making a decision.

Would he accept a reduction in Danone’s performance if it meant he could achieve his goals? For possibly the only time in our interview, Faber does not quite give a straight answer.

“We are making big bets on what’s at stake in food and applying it in reality,” he says. “The most likely case is the bigger we will be, the more impact we will have.”

He later admits that if he had to choose, he would prefer to have an impact on the world than for Danone to retain its global presence. An aide reminds him the business is also performing strongly in the old-fashioned sense — in terms of raising profits and market share.

“I think there is ample room for growth, including the traditional accounting way we have for measuring growth,” he adds. It almost sounds like an afterthought.

Profits, accounting — these are hardly radical ideas. After all, this is a revolution.

At its annual general meeting of shareholders, Danone introduced a set of nine long-term goals for the company and its brands.

Emmanuel Faber, CEO of Danone, wants the world’s biggest yoghurt maker to play a central role in the revolution sweeping the global food industry as it tries to respond to a consumer shift towards healthy eating.

Danone CEO Emmanuel Faber on why industry “mindset” on health and sustainability needs to change – just-food interview, part one – just-food.com

Danone has declared an “Alimentation Revolution”. The France-based food and beverage giant has urged the industry to join a “movement” that aims to “nurture the adoption of healthier and more sustainable eating and drinking habits”.