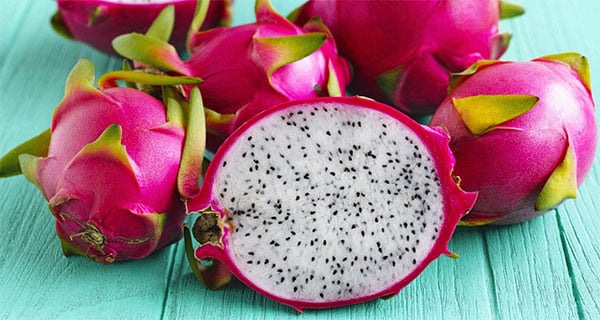 28 Jul 22 Exotic dragon fruit – coming to you from Limpopo

The gorgeous dragon fruit became the culinary darling of lockdown in Vietnam, but few South Africans seem to know it. This looks set to change…

A sweet new generation of this superfood is being grown in the gorgeous reaches of the Grootbosch Valley near Tzaneen in Limpopo.

The dragon fruit, also known as pitaya, is a wonder and a marvel. It’s a cactus, without needles, that likes the tropics and subtropics. The fruit looks like a small pink armadillo, with fleshy scales that are said to resemble a mythological fearsome fire-breathing dragon.

The flesh is firm like a kiwi fruit, with hundreds of specks of tiny black seeds, the fruit colour ranges from creamy white and pale pink to cerise and burgundy. It’s drop dead sexy.

The dragon fruit is huge – meaning commercially grown, widely eaten and much loved – in South East Asia, southern China and South America. It became a culinary symbol of Vietnam’s tenacity and efficacy in handling the pandemic in 2020.

From misfortune to fame

Weeks into cross border trade being closed to China, tons of Vietnam’s dragon fruit faced going rotten, when famed Saigon baker Kao Sieu Luc of ABC Bakery, came up with the idea of using the unsold fruit in their bread to create a new national taste.

Luc apparently perfected his recipe for dragon fruit bread by replacing 60% of the water used in making the dough with a dragon fruit smoothie. The result was bread that was deliciously pink when unbaked, and a darker pink when baked, with a natural fragrance and a crunchy crust.

Luc shared his recipe publicly, it went viral on YouTube, sparked a pink-baked goods revolution – and he then sold his dragon fruit bread to giant fast-food enterprise KFC, who debuted their dragon fruit burger – a chicken burger in a pink bun. It was on sale at selected outlets, and has since evolved into more pink baked offerings.

ABC went from producing 300 loaves of bread on its launch day in February 2020 to making about 20,000 loaves daily due to overwhelming demand. By March 2020, ABC Bakery had gone through more than 30 metric tons of dragon fruit.

​​It’s a long way from any Saigon KFC to Politsi near Tzaneen, and at this stage, South Africa only has a few hundred hectares under dragon fruit production.

But there’s great potential for this sexy little fruit in South Africa – and it leads down a gentle country road through forests, past farmlands and rivers to the magnificent Amorentia Estate and Nursery, home of the trademarked Amorentia Sweet Dragon Fruit.

Amorentia is one of the country’s largest exporters of macadamia trees, they also propagate avocado trees as well as azaleas, camellias and other ornamentals, plus bonsais.

“We are producing a new generation of deliciously sweet, red, pink and white fleshed fruit,” says Howard Blight, owner of Amorentia Nursery. A farmer and businessman, Blight first introduced dragon fruit to the area about six years ago.

Amorentia has registered 14 of the US-developed varieties which he says are far superior to the cultivars currently under small-scale production in the country.

The fruit was “bred” in the USA, says Blight and imported, and now they are being grown, not only at Amorentia, but also in other parts of the country, for the Amorentia brand.

Dragon fruit are super healthy, says Lauren Strever, Howard’s daughter and sweet dragon fruit brand ambassador. Giant pink ceramic dragon fruits guard the doors to her office, where they are in the throes of finalising a dragon fruit cookbook. If you’re in any doubt about how gorgeous dragon fruit is, just check them out on their website or Instagram/Facebook page.

The Amorentia Sweet dragon fruit cultivars are sweeter than the traditional dragon fruit, says Lauren, but with more zing and a crunchier texture. The fruit looks the same on the outside, but the inside flesh ranges in colour from creamy white to cerise, with evocative names like Sweet Azalea, Sweet Ballet, Sweet Coral and Sweet Fiery Kiss.

Lauren says Amorentia is growing 10 cultivars that are not only fabulously psychedelic in colour, but are also so delicious and nutritious they’ve been declared a superfood.

This remarkable fruit has been shown to lower blood sugar levels and blood pressure, strengthen bones and teeth and promote healthy blood and tissue formation, strengthen the immune system, heal bruises and wounds faster, and help with respiratory problems. The fruit is rich in antioxidants, Vitamins B1, B2, B3 and C, polyunsaturated fatty acids, carotene, protein, calcium, iron and phosphorus…..