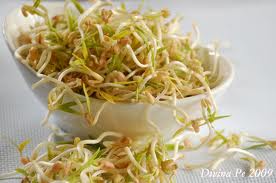 As I write this, there is still uncertainty about the source of the E. coli outbreak in Europe that has killed more than 20 people. But whatever the ultimate conclusion is regarding the delivery vehicle for this deadly bug, don’t blame the sprouts.

Don’t blame the beans, broccoli, peas, chickpeas, garlic, lentils, mung beans or radishes, either, although all of these crops are currently the focus of ongoing investigation. In fact, I encourage a “not guilty” verdict for the entire plant kingdom.

There is much we don’t yet know about the current E. coli outbreak, but what we do know is scary. The bacterium is apparently new on the scene, never before having been isolated. In addition to obvious and lethal virulence, the bug carries with it a number of antibiotic-resistant genes, making it hard to kill. Good at killing while bad at being killed makes a pathogen very bad news indeed.

Since the source and origins of this organism are still matters of conjecture, how can we exonerate the plant foods on which it is currently hitching a ride? We can do it by learning from the follies of history.

After all, we have been here — or in fixes much like this — before. Among the better known of the dangerous E. coli variants is 0157H7. Like the current menace, E. coli 0157H7 is a recently emergent strain, disseminated as a hitchhiker on foodstuffs and capable of killing people. While E. coli 0157H7 has ridden leaves of lettuce and spinach into infamy, this is an enemy whose origins we have met, and we know they are all about meat, not vegetables. When it comes to public health mayhem from mutant germs, plants are innocent bystanders.

Because we eat quite a lot of meat, quite a lot of meat must be produced. Large-volume meat production means large farms, large herds, and large, centralized, highly efficient processing plants. At best, this all translates into relative neglect of any individual steer, and a relative inability to inspect the quality of every steak. At worst, it offers reminders of the “jungle” to which Upton Sinclair introduced us all at the turn of the 20th century.

And it means feed animals are raised as an industrial commodity, rather than as creatures. Their natural diets are disregarded, and they are fed whatever leads to the fastest growth and greatest profit. The origins of E. coli 0157H7 are not mysterious; they relate to changes in the feed of cattle. We say “you are what you eat,” and since the construction materials for growing bodies come from food and nowhere else, it is literally true……

This is an extract from the Huffington Post blog of Dr David L Katz, a prominent American voice in medical media, serving as a expert source for most leading newspapers and magazines, and on the editorial advisory boards of several leading health periodicals and professional journals. He is Founding Director of Yale University Prevention Research Center and Founder & President of Turn the Tide Foundation. Read more on Katz here