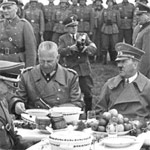 It is hard not to be fascinated by the food choices of political monsters, an area of learning where we can match our enthusiasms and dislikes, against people whom we otherwise take to be not-quite-human. Their culinary foibles are now revealed in Dictators’ Dinners: A Bad Taste Guide to Entertaining Tyrants by Victoria Clark and Melissa Scott, a part-history, part cookbook digest (pun intended) of the favourite dishes and top snacks of 20th-century autocrats.

You discover that Stalin’s favourite chef, Spiridon Putin, was the current Russian President’s grandfather, and that the Man of Steel enjoyed six-hour banquets where the intake of semi-sweet Khvanchkara wine often left distinguished guests puking and incontinent. His favourite dish, chicken with walnuts and spices, is a sludgily off-putting grey mess.

Hitler’s favourite was petits poussins à la Hambourg, or baby pigeons stuffed with tongue, liver and pistachio nuts – and yes, that’s despite his being the world’s most famous genocidal vegetarian. He steered clear of meat, hoping for relief from his chronic flatulence, a condition for which his doctor injected him with, among other things, deadly nightshade, Dr Koester’s Anti-Gas Pills (rat poison) and “essence of Bulgarian peasant’s faeces”.

A pal of Silvio Berlusconi, he liked Italian pastries and pasta dishes, but his first choice was a Libyan national dish, camel meat and couscous (with optional prunes to render it less revolting.)

Another Middle Eastern despot, Saddam Hussein, emerges as a fastidious chap, obsessed with cleanliness and portion sizes. The beef and lamb delivered to his 20 palaces (where they all made three meals a day, in case he showed up) had to be farm-fresh and trimmed of fat, the shrimps and lobsters leaping fresh, the olives sourced at the Golan Heights. He had a weakness for Western treats – Mateus Rosé, Old Parr whisky, boxes of Quality Street. When he was captured in 2003, they found eggs, honey and pistachio nuts in the fridge with a half-eaten tomato salad and a near-empty box of Bounty bars…..