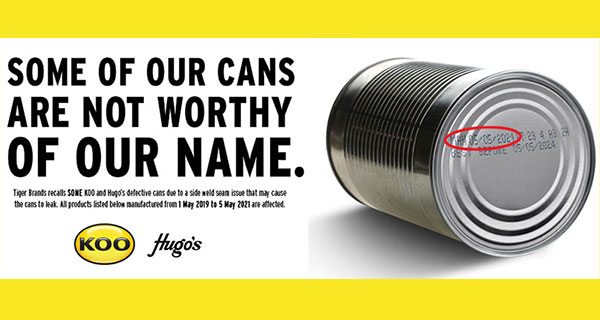 Several analysts are asking the question: “Did Tiger Brands’ move to a cheaper can supplier come at enormous cost, both in money and reputation to itself, and losses to its shareholders and insurers?”

South African consumers and stores have been asked to return 20 million KOO and Hugo’s cans of vegetables, produced between 1 May 2019 and 5 May 2021, to Tiger Brands – this after a small number of cans were found to have defects

According to a Fin24.com report, the cans were supplied by Gayatri Cans, which is part of the Germiston-based Golden Era Group of Companies. Via acquisitions, the group has grown hugely in recent years, becoming the third largest printing and packaging company in Southern Africa after Nampak and Mondipak.

At one of Tiger Brands’ facilities in May this year, 18 cans were found to have a deficient side seam weld that could cause a leak, and contaminate the contents. While that batch and several others weren’t released for trade, a probe determined that some cans from a defective batch were.

Then the company subjected more than 287 000 cans to transport and handling tests, and a side seam leak developed in two cans. This prompted the recall, and has sparked fresh questions about food safety at Tiger Brands – not least because of the 2018 listeriosis tragedy that started at its Enterprise factory in Limpopo. It is still in the middle of litigation regarding that deadly food crisis.

But CEO of Golden Era, Kishor Chhita, says, Fin24, has downplayed the potential health problems that could be caused by the canned vegetable products.

“The recall was a precautionary measure, but it’s not anything like listeriosis … people might get stomach cramps or something like that … it’s not listeriosis,” he told Fin24.

So far, no health problems have been reported due to the can defect, Tiger Brands has confirmed. “Where … contamination occurs, it will present a low probability of illness and injury if the contaminated product is consumed,” it added.

The financial impact of the recall, including the cost of the potentially affected stock that may be written off, transport and storage costs, as well as the loss of margin on the returned stock, is estimated at between R500m and R650m, which is 2% of the group’s revenue. Its share price lost 4% on Monday following the announcement and wiped more than R1bn off its market value.

The group has recall insurance, but its claim under the third-party supplier has not been assessed yet. The company has been engaging with Gayatri Cans on the issue, Chhita said.

Chhita said it was too soon to provide details on what the financial impact would be for Gayatri Cans. He added that Tiger Brands’ recall was “responsible and proactive”.

Mark Narramore, an analyst at investment management company Excelsia Capital, says his company has written to the Tiger Brands, seeking clarity about the situation. He said that the group didn’t own Tiger Brands stock, but it holds shares in packaging company Nampak, which Narramore said lost its canning contract with the food producer in 2019.

At the time, Tiger Brands’ decision to switch away from Nampak sparked concerns, Narramore said.

One source, who spoke to Fin24 on condition of anonymity, said the new supplier offered lower prices.

Zaid Paruk, a portfolio manager and analyst at Aeon Investment Management, said the recall was unfortunate since it affected 9% of Tiger Brands’ production and the move to the new supplier had clearly affected quality.

He also said although it was encouraging that Tiger Brands had informed the market of what had happened, the recall would affect sentiment in the short term until the issues are resolved.

Simon Brown, market analyst and founder of Just One Lap, said although there was no link between the recall and the listeriosis outbreak and the recent issue was caused by the supplier, it was still a blow to Tiger Brands’ reputation.

“It looks bad for the company, and reputation – especially in food products – is critical. This is another dent into that reputation,” Brown said.

“As things stand, it does seem that Tiger Brands has acted quickly and decisively, compared with [the] previous occasion when it handled the listeriosis case,” said Jeremy Sampson, CEO of Brand Finance Africa, a brand valuation consultancy house. “In a crisis situation, you act fast and maintain your integrity. Let’s face it, from time to time things like this will happen.”