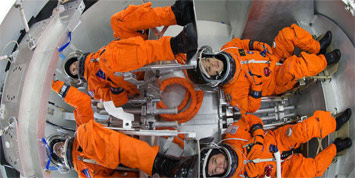 NASA food scientists are busy with new challenges: creating new foods for the crews of the first manned deep space missions since Apollo, and which will fly them one day to Mars.

To save space and weight aboard the Orion space capsule, NASA is developing a next generation breakfast bar that provides enough calories and nutrition to keep a busy astronaut going, yet remains appetising enough to eat for weeks on end.

One advantage of the International Space Station (ISS) is that the food is much better than during the days of the Space Race.

Instead of toothpaste tubes filled with applesauce or plastic bags of warmish orange drink, station crews have a choice of over 200 items that include beef steaks, tacos, hamburgers, kimchi, borscht, fresh fruit, and even espresso.

Unfortunately, this won’t be the case with the Orion. If the ISS is an aircraft carrier with four full galleys, then Orion is a patrol boat with a food locker and a warming oven.

Though the Orion astronauts can choose, within restrictions, what they want to eat, there are practical limits that the ISS doesn’t face.

The cramped crew capsule hasn’t nearly as much room as the ISS, and because it’s designed to operate in deep space, its payload weights are much tighter. Still, it needs to carry enough food for the crew as they spend weeks or even months in long-range missions but cannot be resupplied from Earth, nor can it dump its rubbish until it returns home.

To cut down on space and weight, NASA wants astronauts to substitute breakfast for food bars.

The bar has to provide enough calories as well as a carefully balanced diet, need no special storage or cooking facilities, and leave no waste beyond its minimal packaging. In addition, it needs to lightweight and have a shelf life of several years.

Commercial breakfast bars are designed for relatively sedate people who have easy access to other foods. There aren’t any food bars that meet NASA’s requirements and no one wants to use lifeboat rations, so NASA had to take on the task of designing it in house.

What it is working on is a breakfast bar that provides 700 to 900 calories and balanced nutrients to act as a meal substitute.

The goal is to provide flavours like orange cranberry or barbecue nut to have enough taste and variety to keep morale high and the astronauts wanting to eat them even after weeks in space – though what the final bars will ultimately look and taste like has yet to be decided.

NASA’s Human Research Program is helping with the project, and test crews in the space agency’s HERA three-storey habitat simulator at the Johnson Space Center in Houston are being fed the prototype bars and supplying feedback on their flavour, texture, and resistance to food fatigue.