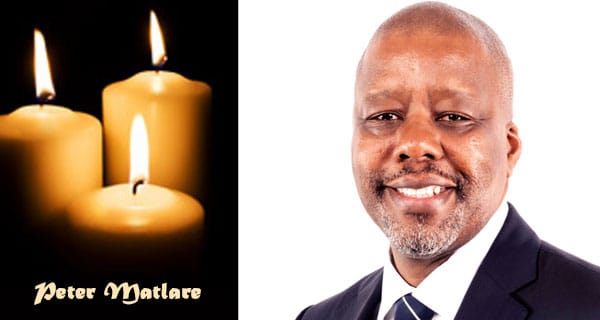 Peter Matlare, ex CEO of Tiger Brands and the current Absa banking group’s deputy CEO and head of its Africa regional operations, died of Covid-19 complications on Sunday March 7, making him the highest-profile business leader to succumb to the disease.

The Matlare family confirmed his death, saying in a statement: “Peter was a consummate professional, who made an immense contribution to business in SA and across the African continent. He was passionate about transforming businesses, and believed deeply in the potential of Africa.

“Family was a cornerstone of Peter’s life. He was a pillar of strength around whom the family coalesced. He used his talent and passion for cooking to regularly gather the family for Sunday lunches, and maintain deep connections in the family.

“His support for family, friends and colleagues has left a lasting legacy. May his soul rest in peace.”

Matlare was seen as a transformation pioneer. He led the SABC from 2001 to 2005, with the last year of his tenure being one of the broadcaster’s most profitable. He was chief strategy and business development officer of Vodacom before being appointed to lead diversified fast-moving consumer goods group Tiger Brands, which he led for seven years.

The horrendous Covid-19 pandemic storm has blown out the life of Peter Matlare at the age of 61. It is a massive loss. He still had over a decade of brains to share experiences and mentor an upcoming cohort of executives.

Matlare ranked amongst a cadre deployed to state-owned enterprises under President Thabo Mbeki. This squad proved themselves in state-owned companies and subsequently caught the eye of big capital invested in JSE-listed entities.

Matlare was part of this excelling group in the South African SoE leadership cohort that was never indicted of corruption.

This cream of the crop had led as directors in-state entities such as Transnet, Eskom, Telkom, South African Revenue Services, the Industrial Development Corporation et cetera. This squad went on to lead in systematically important financial institutions such as Standard Bank, Nedbank, Absa and FirstRand.

Like any doers, these leaders made mistakes in the execution of their duties but were never remotely accused of embezzling state resources.

Matlare led at the South African Broadcasting Corporation (SABC) , Primedia, Vodacom, Tiger Brands and Absa. Under his leadership at Primedia, according to colleague Dan Moyane, Matlare was committed to the world of business, and serious about strategy. When Matlare went to the SABC it was struggling but it succeeded during his tenure.

During Matlare’s tenure at the fast-moving consumer goods company some investment analysts had initially praised Tiger Brands for expanding into the West African region but when capital was lost these people predictably did award-winning skateboard turns and went on to attack him for poor due diligence.

The failed venture in some parts of the continent pushed Matlare into defensive mode and it somehow raised his temper when journalists and analysts interrogated him for waste of capital.  In serious business, capital impairments are scandalous.

As iconic investor Warren Buffet often quips, “rule number one is, never lose money and rule number two is never forget rule number one”. Matlare took big hiding for this. But the caning was unequal.

Many executives in South Africa were never fired for getting caught swimming naked on their African safaris or forays into other emerging developed markets. Top of mind are South African retailers, banks, telecommunications companies etc whose CEOs were never pushed out for impairing assets in Australia and Nigeria.

When the chips were down at Tiger Brands, the Board at Absa converted Matlare into an executive director at Absa under the leadership of Maria Ramos. It was a time when Absa under Ramos had ventured deep into the continent….