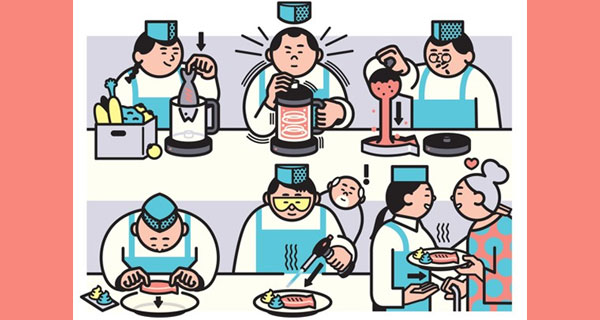 In Japan, where more people die each year from choking than in traffic accidents, mushy food is getting a high-tech treatment.

Here’s a grim fact: According to the diaper maker Unicharm, in Japan, adult diapers now outsell baby diapers. That’s because a quarter of the country’s population is 65 or older. By 2060, that proportion will hit 40 percent.

What adjustments have to be made when so many people grow old simultaneously?

To take one example, after a recent surge in accidents involving older drivers, the government began testing the Robot Shuttle, an autonomous bus intended for use in rural areas, where Japan’s shrinking pains have hurt the most. Other tweaks include slowing down escalators and equipping shopping carts with magnifying glasses.

It’s long been observed that Japan’s aging doesn’t bode well for its economy. Lots of old people means a financial drain on both the private and public sectors, as health-care and pension costs skyrocket and productivity declines.

But the news isn’t all bad: Amid this elder boom, a new, 100-trillion yen ($800-billion) consumer category has emerged, known as “the silver market.”

Millions of Japanese seniors who have long been saving for retirement find themselves at the center of a commercial bonanza.

The products vying for their attention range from Docomo’s Raku-Raku 4, a smartphone that’s “easier to hear” and also has jumbo screen icons, to Fujisoft’s Palro, a $6,000 “carebot” that combats dementia through trivia games and fitness drills.

Even video-game arcades, long a bastion of youth, are wooing golden-agers with benches for resting; arcade staffers are encouraged to get certified as senior-friendly “service assistants.”

The most intriguing product, though, may be engay food. Engay is Japanese for “swallowing,” something that can become increasingly difficult as people age: More Japanese now die each year from choking than in traffic accidents.

Instead of settling for, say, a cup of Ensure-brand pudding, throw some cooked salmon in a blender. Then, with a little help from modern chemistry, mould the resulting pink puree back into the shape of a fillet, and add “grill” marks with a propane torch.

Presto: salmon that looks like it was plated in a restaurant and almost tastes that way, minus the flaky texture.

The thing that makes this culinary alchemy possible is a gelling agent called Softia G, one of many nutritional-therapy products from Japan’s Nutri Co.

Softia G allows cooks to reshape pureed food into something resembling its original form, but with a texture that goes down easy. Almost any dish can get the engay treatment, from dumplings to mochi cakes.

The technique has been widely featured on cooking blogs and has given rise to its own cookbook and cooking contest. Even the fancy Hotel New Otani Osaka now uses it to prepare meals for geriatric guests.

The contrast between the American and Japanese approaches to food is stark. “It’s a difference of cultures,” explains Koichi Yanagisawa, a marketing executive for Nutri. America serves its eldest residents mush; Japan serves them salmon à la torche.

Gels, Foams and Purees: Cookbooks Serve Up Recipes For Those Who Struggle To Swallow

Diane Wolff is known as “The Queen of Puree.” With 12 self-published books — including The Essential Puree: The A to Z Guidebook — a blog, and a busy schedule training caregivers and medical professionals, she is helping pioneer a new approach to an increasingly common disorder. The essence: simple, intensely flavourful food that is easy on the throat and packed with good nutrition.