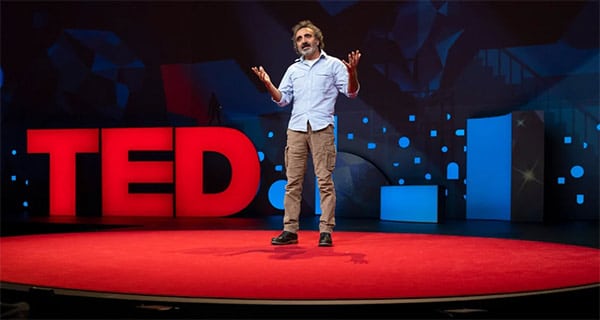 Posted at Tuesday, May 7th, 2019 h in Top International Stuff by Brenda 0 Comments

In mid-April, the founder of massively successful US yogurt company Chobani, Hamdi Ulukaya, gave the opening talk for the first night of TED 2019, this year’s TED talk conference in Vancouver. In short, he posited, most CEOs are leading their companies wrong.

The anti-CEO is about community, responsibility, and accountability – not maximizing value for shareholders.

It’s not that Hamdi Ulukaya doesn’t believe in the power of business. He does. The CEO of Chobani, who emigrated to the US from Turkey as a young man who spoke no English, fell into the role of entrepreneur almost by chance.

The story of how he found a flyer advertising the sale of an old Kraft yogurt factory in upstate New York in the trash and decided to buy it, ultimately launching what would become the multibillion-dollar company Chobani, has become business world myth.

But he also believes that the status quo of business today is fundamentally flawed. “It’s time to admit that the playbook that’s guided businesses and CEOs in the last 40 years is broken,” Ulukaya said on the stage at TED in Vancouver.

The idea of maximising profits solely for the purpose of benefitting shareholders is, to Ulukaya, “the dumbest thing I’ve heard in my entire life.”

From the outset, he’s prioritised hiring refugees and paying above-average wages, while offering benefits like comprehensive parental leave. What prompted Ulukaya, after all, to purchase the Kraft yogurt that was shutting down, was meeting the people who worked there.

“The company wasn’t giving up on yogurt, it was giving up on them, as if they weren’t worth it,” Ulukaya said. “I was so angry at the CEO far away, in a tower somewhere, looking at a spreadsheet and closing the factory.

Here are his four secrets to how the Turkish immigrant turned Chobani into the most successful yogurt brand in recent times.

1. Be grateful to your employees.

“Don’t worry about your shareholders, but your employees.”

According to him, people thought he was insane. But Ulukaya knew that the investment in his company would give a serious return–and an intense loyalty.

“The biggest businesses today ask, ‘What kind of tax breaks can you give to us?” when, in reality, we should go to the community and ask, ‘What we can do for them?'”

For the second major Chobani factory, Ulukaya asked the local community what support they needed. In his words, Chobani asked for permission. The company then trained locals to create yogurt and strategically helped build up the economy in a way that empowered locals.

“Don’t stay out of politics, but you must pick a side.”

Ulukaya is a well-known advocate of immigrant support–30 percent of Chobani’s employees are immigrants. He considers this decision not only personal, since he is from Turkey, but also political, as he believes in supporting new Americans.

“Business, not government, will be the main social change agent in the world,” he said.

For years, Ulukaya put his personal number on each Chobani container. It allowed him to get feedback from those he served. It directly influenced his business decisions, he says, and helped change the direction of the company.

At TED, he said failure to follow these four tenants blocks companies from having sustainable, healthy success. “This is the difference between profit and true value,” he said.