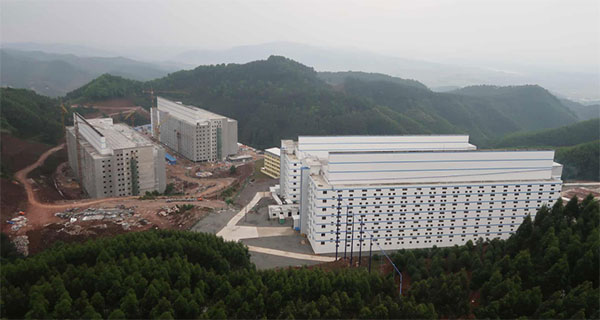 China is taking pig biosecurity to new levels – 13 stories in fact – to mitigate the ravages of African swine fever and cater for the rapidly growing demand for meat protein.

That’s the height of a building in southern China where more than 10,000 pigs are kept in a condominium-style complex, complete with restricted access, security cameras, in-house veterinary services and carefully prepared meals.

The seemingly luxurious conditions represent a state-of-the-art approach to biosecurity in which pigs – the main source of meat in China – are shielded from viruses, including the devastating African swine fever that wiped out half the nation’s hogs in the two years before the coronavirus pandemic emerged.

Nicknamed “hog hotels”, these gigantic vertical farms are being built by companies, including Muyuan Foods and New Hope Group, emulating the strict controls major suppliers in other countries have used to prevent outbreaks of the devastating disease.

China is copying best-practices from Europe and the US to close its biosecurity gap, said Rupert Claxton, the UK-based meat director at consultant Gira, who has been providing advice to farmers and businesses for two decades. “In 20 years, it’s done what the Americans took probably 100 years to do,” he said.

Lethal African swine fever, which sickens pigs much like Ebola kills humans, caused a dramatic outbreak in China in 2018. Within a year, roughly half the nation’s herd of more than 400 million pigs had been wiped out – more than the entire annual output of the US and Brazil combined – leading to rocketing prices and unprecedented imports.

Food security became a top priority, and as inflation surged to the highest in eight years, the government had to turn to emergency sources of frozen meat to cool prices. New agriculture policies were instituted to accelerate a shift to large-scale, industrial operations over backyard farms that have traditionally fattened pigs on raw kitchen scraps and swill – the main sources of African swine fever.

Now, domestic hog numbers recovered more swiftly than anticipated because mega farms have expanded capacity so aggressively. Wholesale pork prices have tumbled so much that it tripped the government’s new alert system, prompting authorities to begin buying pork for state reserves and to shore up the market.

Still, the virus threat persists, with 11 incidents reported so far in 2021, prompting the culling of more than 2,000 pigs, China’s farm ministry said in July.

The emergence of new strains that appear to cause milder symptoms and have a longer incubation period are complicating efforts to detect and respond to outbreaks, the ministry said.

In developed countries, pig production is dominated by bigger farms in fewer hands. This has been seen for decades in the US, Denmark and Netherlands, which have among the best biosecurity standards globally and never reported a single African swine fever outbreak in recent years.

These days, mega pig complexes that don’t rely on other farms for sows, fodder and labour – which risk introducing pathogens – are a pillar of China’s food security. As of 2020, 57% of the country’s pig production is from farms supplying more than 500 hogs a year. Before the outbreak, only about 1% came from larger suppliers.

New Hope Group recently completed three five-story buildings across an area the size of 20 football fields, or 140,000 square meters, in Beijing’s eastern Pinggu district. The facility, which can be smelled from about a kilometer away, will eventually produce 120,000 pigs annually, making it the largest in the Beijing area.

It’s equipped with robots that monitor animals for fever, air filtration, and automatic feeding and disinfection systems, according to Gong Jingli, the supervisor in charge. A request to visit was declined on biosecurity grounds.

That’s in part because the scale of these farms means more is at stake. With thousands of pigs housed in close proximity, an infectious disease could spread rapidly.

Strict protocols are enforced to minimise risks. Staff are required to shower and change their clothes on entering and exiting the facility – much like scientists working in biosafety laboratories. Wristwatches must be left outside.

Tom Gillespie, a U Sswine veterinarian with 40 years of experience and who visits farms in Asia annually, said he was asked to remove his wedding band before entering a facility in China, but was allowed to keep his spectacles on. The requirement was a reaction to African swine fever, he said, and may be relaxed once operators are more familiar with managing biosecurity risks.

Some mega farms have built staff dormitories to try to limit workers’ contact with the “outside” – a strategy Gillespie said would be difficult to implement in other countries.

So far, large-scale farms in China have also avoided many of the restrictions applied to their overseas counterparts because of animal welfare and environmental concerns.

“In Europe and US, there are restrictions on how big we can make a pig farm because people just object – they don’t want to live next to these huge sites,” said Gira’s Claxton. “In China, that doesn’t seem to be the case. If it’s decided that a pig farm is needed, then the space is available.”

Expanding vertically is a popular option in a country lacking vast tracks of empty space. Rapid urbanisation has diminished land available for agriculture, and environmental regulations have made intensive animal production increasingly difficult in metropolitan areas.

High-rise blocks can cut farmland use by a third compared with traditional farms with the same number of pigs, and there’s flexibility in terms of location as some can be built on mountains, said New Hope’s Gong. Wastewater from the Pinggu plant is treated and used to irrigate orchards nearby, while the solid waste is turned into fertilizer, Gong said.

“China is the world’s largest pork-consuming nation, and I don’t see that changing very easily or any time soon,” said David Ortega, associate professor of Food and Agricultural Economics at Michigan State University in East Lansing. “Rebuilding the pork sector is a national priority for the government.”

Commentary by AgWeb.com on waste management in these ‘StyScrapers‘

“How do these pork megaplexes solve one of producers’ biggest headaches – how to handle the immense amount of manure? Almost surely the Chinese have answers, but all we could find was references to waste treatment facilities. How they distribute it over thousands of tiny farms is baffling. Or they may be simply ignoring these problems, polluting rivers and overloading without regulation. Even dried to solid form, the problem of phosphate loading on farmland, not to mention nutrient runoff, is a formidable challenge. If viewers know how these megaplexes handle manure, we would appreciate a link.”