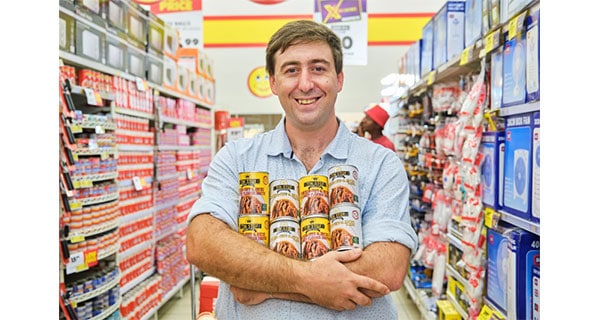 A favourite township street food is appearing in canned format on Shoprite shelves across South Africa, thanks to a recent deal with a young Limpopo-based entrepreneur who started his business during the height of lockdown.

South Africans know it as ‘walkie talkies’. Chicken feet, heads, necks, and giblets – parts of the bird usually discarded – are grilled, or sometimes fried, and sold as affordable street food in townships throughout the country.

It’s not a meal expected to be found on the shelves of South Africa’s biggest retailer. But that’s exactly where chicken feet and necks have recently ended up, in 400g cans.

Shoppers can expect to find, on average, six feet and three necks in each can, which comes in original or curry-flavoured broth.

The product has been created by 26-year-old Eiren Drake (pic above) and his late grandfather Spencer Drake. The two started constructing a canning plant in Tzaneen in 2017.

“As a young boy, I spent a significant amount of time with my late grandfather’s employees, whose children were my friends and playmates,” says Drake.

“It was then that I was first introduced to the widely loved and consumed dish of chicken feet, which very quickly became one of my favourite meals, and it still is today.”

The plant was commissioned in 2020, just as the Covid-19 pandemic impacted South Africa. Its flagship product line, under the Tin Stuf brand, was produced that same year and sold directly through its website, WhatsApp, and Facebook page.

“The unexpected passing of my business partner, investor, life coach, mentor, and beloved grandfather was, and has since been, by far the most difficult challenge that I’ve had to mitigate,” says Drake.

However, in February this year, things turned around when Drake was approached by the Shoprite Group and agreed on a three-year exclusive deal to supply the retailer.

A year after the tragedy, Tin Stuf’s canned ‘walkie talkies’ began appearing at several Shoprite & Shoprite Hyper outlets in the Eastern Cape and Western Cape, after the Limpopo canning factory received its Food Safety Certificate from the retailer.

“What better way than to bring an already widely loved and consumed product to the shelves of the country’s biggest retailer…. Shoprite has given us access to market… and to grow our business… We can produce 300 000 to 600 000 units per month,” says Drake.

The factory currently employs 35 people per production shift, and they have room to increase this to as many as 60 full-time employees should demand for the product increase.