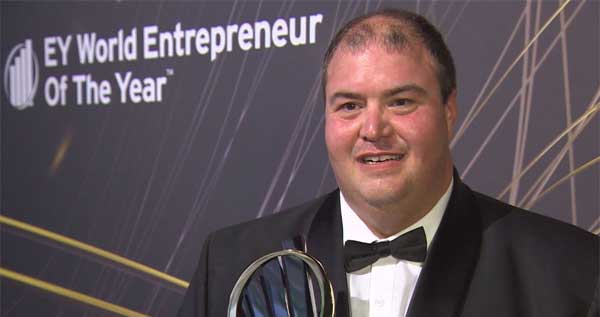 EY’s (Ernst Young) entrepreneur of the year, Murad al-Katib from Canada, has built a spectacularly successful global business on a crop that solves a plethora of problems. Who would have thought there was an enormous future in lentils, but when Katib explains it, it’s kinda obvious.

Lentils are a high-protein, low-cost crop with a low environmental impact in a world in which the population is increasing by 75-million people a year – more or less the population of Canada.

The Canadian, born to immigrant parents, was picked from 59 individuals representing 49 countries. Katib, an enormous man with a disconcertingly bubbly personality, is CEO of AGT Foods and Ingredients, which has a big business in SA, based, as one would expect, in Krugersdorp. AGT is not a food company as much as a food trader, selling seed and buying the product to sell on.

His business empire supplies lentils, chickpeas and peas to more than 120 countries. AGT went public in 2007 and has been increasing revenues by an average of more than $100m a year to $1.4bn in 2016. It has made 17 acquisitions in 15 years and now runs 46 manufacturing facilities and employs 2,000 people around the world.

AGT, with a market cap of $450m, is small by the standard of food giants such as General Mills of the US and Associated British Foods, which are both about 60 times larger. But it handles about a quarter of the world’s lentils and has big stakes in a range of other pulse crops.

He implicitly acknowledges, in case you were wondering, that lentils taste horrible However, lentils and beans are increasingly being sold in spice-rich packs. That is the way they are eaten in the Middle East, which is where Katib’s family originates.

The judges of the EY competition do seem to love an immigrant dimension to the story; 2016’s winner was a refugee. And, of course, social awareness is crucial. Katib said he didn’t really see “social entrepreneurs” as particularly a class on their own; social entrepreneurship was now simply an integral part of doing business. Younger consumers, in particular, expect companies to operate in an environmentally and socially conscious way.

Jim Nixon, chief executive of Nixon Energy Investments and chairman of the independent judging panel, said: “Murad is an incredible entrepreneur who has demonstrated outstanding value creation, organisational reach and expansion. Through sustainable agricultural practices, he is making a positive impact on the global environment.”

AGT has also used its manufacturing and distribution network to deliver more than 4m family ration packs to international agencies for Syrian refugees under the UN World Food Programme.

In 2016, he was named Global Citizen Laureate by the United Nations Association in Canada. In March this year he was one of four people (including Elon Musk the founder of Tesla electric carmaker and SpaceX) honoured with the Oslo Business for Peace Awards. Katib received the award for his contributions to sustainable agriculture and feeding refugees.

“When I look at the emerging markets of the world . . . you know a basic building block of civil society is actually available food. A baby is hungry, they cry. A young man is hungry, they actually get angry. It’s civil unrest. It’s war,” Katib told the Financial Times.

He explained that he was particularly motivated to provide protein in vegetable form as opposed to meat because meat production takes a greater toll on the environment.

“Water is one of our scarcest resources,” he said, pointing out that lentils require far less water to grow than beef. “In order to meet our food targets in the future, we need to create 2bn vegetarians,” he said.

For entrepreneurs, winning the top award in Monaco every year is the ultimate prize – or at least it’s presented as such. But the survey EY puts out every year shows, or at least purports to show, that entrepreneurs take the social aspects of their work very seriously.

EY expanded its survey in 2017 from the winners of the competition around the world to what it describes as “middle-market” companies (with a turnover of up to $3bn). It surveyed 2,340 business leaders in 30 countries about their ambitions, challenges and strategies. This group consists of about 99% of all enterprises and about 45% of global GDP.

The vast majority (90%) signed on to the idea that growth cannot be sustainable unless it benefits a wider community. For this group, “inclusive growth” is not an add-on strategy; it is the whole point.

About a third of those surveyed were aiming for growth of between 6% and 10% over the next year; and 14% of respondents are looking for 16% and over.

The most surprising finding is that smaller companies are enthused by the ructions dominating the political stage, which they see as possibly providing openings to gain market share and grasp new opportunities. Fully 89% of all middle-market C-suite executives agreed that uncertainty provided them with opportunities to disrupt market leaders.