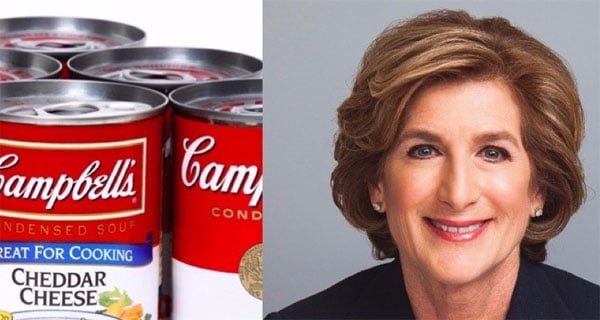 Posted at Sunday, May 20th, 2018 h in Top International Stuff by Brenda 0 Comments

Campbell Soup’s chief, Denise Morrison, has stepped down abruptly and the company has indicated it might sell some brands, after a bet on fresher foods under her leadership has failed to revive sales.

Campbell’s US soup sales — its core business — fell in all but one year of Morrison’s seven-year tenure. Efforts to enter the faster-growing fresh-food business, through the acquisition of Bolthouse Farms juice for instance, hit their own hurdles.

Campbell’s shares fell 12% as the company also reported worse-than-expected earnings and lowered its guidance for the year.

Like other American packaged-food mainstays, Campbell has been under intense pressure to satisfy customers seeking healthier and more convenient foods.

Decades ago companies like Campbell, Kellogg and General Mills introduced consistent and in many cases long-lasting products that routinely filled American pantries.

Beyond soup, Campbell makes Pepperidge Farm cookies, V8 juices, SpaghettiOs and more. But those traditional suppliers are now squeezed on one end by higher-end, often fresher brands and on the other by cheaper store labels that grocers have added aggressively in recent years.

Campbell said Morrison, 64-years old, will be succeeded for now by board member Keith McLoughlin while the company undertakes a review of its product portfolio, which could involve selling some brands and distributing resources differently among others.

“We must take a fresh look…with urgency,” McLoughlin said. “Everything is on the table. There are no sacred cows.”

Some analysts think Kraft Heinz, which was formed in a roughly $49-billion merger in 2015, could try to acquire Campbell.

To succeed, the suitors would have to win over Campbell’s insider shareholders, including the Campbell Trust and Mary Alice Dorrance Malone, a board member and heiress to the company’s founders. Together those groups own about 42% of Campbell’s shares, according to Factset.

Morrison is the 15th CEO to leave a major packaged-food or meat company since the start of 2016, said JP Morgan analyst Ken Goldman. Last year, Kellogg, General Mills, Mondelez International and Hershey all got new chiefs.

The failure of big food makers to anticipate consumer demand for simpler, recognisable ingredients and fresher foods has left them playing catch-up to newer, smaller rivals.

“Our company has clearly faced challenges,” said McLoughlin, 61, who has been on Campbell’s board since 2016. “Some of those are external factors that are impacting the entire industry and others stem from our execution.”

Morrison was acutely aware of what she often called a “seismic shift” in the way people are eating. She was determined to win over millennials and transform Campbell into a broader “health and well being” company.

Morrison diversified the business through acquisitions that she hoped would counteract sales declines for its soup, Swanson broth and Prego pasta sauce.

Campbell in December said it would acquire snack maker Snyder’s-Lance for $6.1-billion, including debt, its biggest deal ever. Morrison boasted at the time that the deal meant Campbell’s product line covered everything “from soup to nuts.”

Analysts saw it as a break from her plan to focus on fresher foods.

Morrison has said it was hard to push a traditional, century-old company to take risks like the Bolthouse Farms purchase. But that deal didn’t pay off as she hoped. Fresh foods have proved hard to source and manage when weather affects produce harvests.