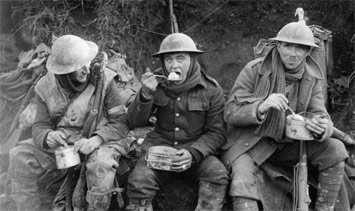 Here’s a fascinating item of food history a hundred years on from WW1 – how soldiers in this most awful of conflicts survived not only the trenches but also their rations….

Rewind 100 years and the Battle of the Somme would be grinding to a close. For 141 days soldiers had suffered the worst that modern warfare could deliver: bombardment, chemical weapons, failed advances and a level of casualties no one could have anticipated.

In this centenary year, multiple articles have been published on the terrible conditions, the tactics, the tear gas. But what about the teeth?

Dentistry, granted, is not a topic that often comes up when discussing World War I. But the poor state of working-class mouths – no dental care for most of them – and the difficulties that the very basic army food presented, made the all-consuming pain of acute toothache all too common. So what were the soldiers eating?

Military leaders have long noted that armies “march on their stomachs”, so the 1914 British army command was well aware of the significance of rations to its men.

Difficulties in the Crimean War, where more soldiers had been admitted to the hospital at Scutari suffering from scurvy than from battle wounds, had prompted a series of army dietary reforms over the second half of the 19th century.

Improvements in nutritional science had also helped to shape the provisioning of the army – although the emphasis on energy values to the exclusion of other considerations resulted in a diet that, while high in calories, was often lacking in variety, difficult to consume and somewhat indigestible.

In the summer of 1914, the army provided the same level of feeding for all, but soon found this unsustainable and a series of adjustments followed, reserving the best rations for those in the front line.

Those in reserve and in the training camps at home received considerably less.

The fighting man’s calorie quota was on a par with that of the modern British Army, although contemporary ration packs offer a level of variety unimagined by those serving a century earlier.

In terms of national comparison, the British fared pretty well, the Americans had the most calories – and the French a widely envied daily wine ration.

If actual rations met the official description, and the cooks were of a decent standard, all went relatively well.

A relatively static war meant that the delivery of rations was usually reliable – at times of advance or retreat the long supply chains could be interrupted, but most of the time the complex set of movements from Base Supply Depots to the front was sustained.

Unfortunately, the cooks’ efforts often fell short, although they were hindered by the army’s own recipe books where, for example, the list of ingredients for “Fish Paste” contained four tins of sardines – and eight of bully (corned) beef.

If you were a British soldier serving on the front line in 1917, your rations (comprising a desired 4,193 calories per day) would be as follows:

This may look like a pretty good diet, but the army sought to deliver the greatest number of calories in the easiest manner – and that often meant tinned (both meat and biscuit) rather than fresh food.

A tin of Maconochie’s meat and vegetable stew, especially when heated up, was the acceptable face of canned food. Cold corned beef wasn’t – and biscuit was even less popular.

The British working classes had grown up on a diet dominated by bread, so while a hard-baked carbohydrate substitute may have scored highly in logistical terms it was regarded by most men as an abomination. 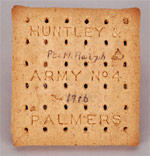 The bane of biscuit

Scores of cartoonists and writers have made jokes about biscuit’s similarity to kindling, but it was no laughing matter.

Many of the working and lower-middle-class soldiers had very poor teeth – the result of too much sugar and too little dentistry. The army was reluctant to pay for dentists and when the British Expeditionary Force travelled to France in 1914 not one dentist accompanied them.

It was only when General Douglas Haig developed excruciating toothache at height of the Battle of Aisne in October of that year that the cost of their absence was realised. No one was able to treat Haig and he was forced to await a French dental surgeon from Paris.

Haig subsequently contacted the War Office to request the recruitment of army dentists for the BEF – 12 dentists arrived in November and a further eight by the end of 1914.

Jokes about the state of the nation’s teeth also reached the pages of Punch. In August 1914 it published a cartoon of a disgruntled man at a recruiting office protesting to the MO who’d turned him away because of his rotten teeth: “Man, ye’re making a gran’ mistake. I’m no wanting to bite the Germans, I’m wanting to shoot ‘em.”

Defective teeth were a major cause in rejecting volunteers and so patriotic dentists stepped forward. C J McCarthy of Grimsby advertised in the local paper promising free treatment to the first 25 volunteers rejected because of their teeth that reported to his surgery.

Dentistry mattered: in the theatre of war, losing a set of false teeth effectively rendered the soldier useless because the conditions at the front didn’t allow for a soft diet for toothless men.

Canon J O Coop wrote home to his wife that one man had a self-inflicted wound and “to make more certain [his escape from the front line] he had thrown away his false teeth because he knew that men who lost their teeth were sent to base”.

The army’s efforts weren’t always met with enthusiasm, but innovative Tommies knew how to make the best of what was available, often grinding the biscuits to a powder, mixing in a tin of milk and one of jam – preferably not the eternal plum and apple – and heating. Making the rations palatable was a key skill learned alongside the more distressing aspects of warfare.

The Conversation, authored by Rachel Duffett, Teacher and Researcher, University of Essex.