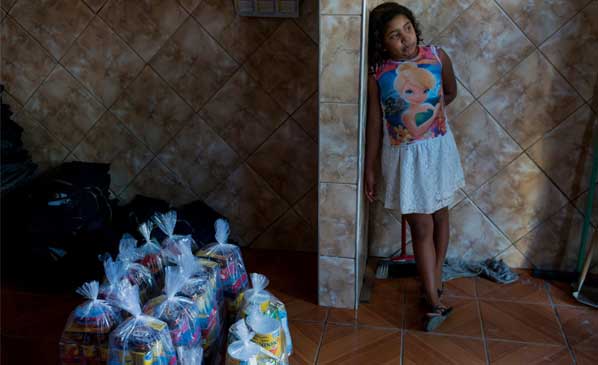 As growth slows in wealthy countries, Western food companies are aggressively expanding in developing nations, contributing to obesity and health problems. [Provocative article from the NYT. A long but fascinating read. Ed]


FORTALEZA, Brazil — Children’s squeals rang through the muggy morning air as a woman pushed a gleaming white cart along pitted, trash-strewn streets. She was making deliveries to some of the poorest households in this seaside city, bringing pudding, cookies and other packaged foods to the customers on her sales route.

Celene da Silva, 29, is one of thousands of door-to-door vendors for Nestlé, helping the world’s largest packaged food conglomerate expand its reach into a quarter-million households in Brazil’s farthest-flung corners.

As she dropped off variety packs of Chandelle pudding, Kit-Kats and Mucilon infant cereal, there was something striking about her customers: Many were visibly overweight, even small children.

She gestured to a home along her route and shook her head, recalling how its patriarch, a morbidly obese man, died the previous week. “He ate a piece of cake and died in his sleep,” she said.

Mrs da Silva, who herself weighs more than 200 pounds, recently discovered that she had high blood pressure, a condition she acknowledges is probably tied to her weakness for fried chicken and the Coca-Cola she drinks with every meal, breakfast included.

Nestlé’s direct-sales army in Brazil is part of a broader transformation of the food system that is delivering Western-style processed food and sugary drinks to the most isolated pockets of Latin America, Africa and Asia.

As their growth slows in the wealthiest countries, multinational food companies like Nestlé, PepsiCo and General Mills have been aggressively expanding their presence in developing nations, unleashing a marketing juggernaut that is upending traditional diets from Brazil to Ghana to India.

A New York Times examination of corporate records, epidemiological studies and government reports — as well as interviews with scores of nutritionists and health experts around the world — reveals a sea change in the way food is produced, distributed and advertised across much of the globe.

The shift, many public health experts say, is contributing to a new epidemic of diabetes and heart disease, chronic illnesses that are fed by soaring rates of obesity in places that struggled with hunger and malnutrition just a generation ago.

The new reality is captured by a single, stark fact: Across the world, more people are now obese than underweight. At the same time, scientists say, the growing availability of high-calorie, nutrient-poor foods is generating a new type of malnutrition, one in which a growing number of people are both overweight and undernourished.

“The prevailing story is that this is the best of all possible worlds — cheap food, widely available. If you don’t think about it too hard, it makes sense,” said Anthony Winson, who studies the political economics of nutrition at the University of Guelph in Ontario.

A closer look, however, reveals a much different story, he said. “To put it in stark terms: The diet is killing us.”

Even critics of processed food acknowledge that there are multiple factors in the rise of obesity, including genetics, urbanization, growing incomes and more sedentary lives.

Nestlé executives say their products have helped alleviate hunger, provided crucial nutrients, and that the company has squeezed salt, fat and sugar from thousands of items to make them healthier.

But Sean Westcott, head of food research and development at Nestlé, conceded obesity has been an unexpected side effect of making inexpensive processed food more widely available.

“We didn’t expect what the impact would be,” he said.

Part of the problem, he added, is a natural tendency for people to overeat as they can afford more food. Nestlé, he said, strives to educate consumers about proper portion size and to make and market foods that balance “pleasure and nutrition”.

There are now more than 700 million obese people worldwide, 108 million of them children, according to research published recently in The New England Journal of Medicine. The prevalence of obesity has doubled in 73 countries since 1980, contributing to four million premature deaths, the study found.

The story is as much about economics as it is nutrition. As multinational companies push deeper into the developing world, they are transforming local agriculture, spurring farmers to abandon subsistence crops in favour of cash commodities like sugar cane, corn and soybeans — the building blocks for many industrial food products.

It is this economic ecosystem that pulls in mom-and-pop stores, big box retailers, food manufacturers and distributors, and small vendors like Mrs da Silva.

For a growing number of nutritionists, the obesity epidemic is inextricably linked to the sales of packaged foods, which grew 25 percent worldwide from 2011 to 2016, compared with 10 percent in the United States, according to Euromonitor, a market research firm.

An even starker shift took place with carbonated soft drinks; sales in Latin America have doubled since 2000, overtaking sales in North America in 2013, the WHO reported.

The same trends are mirrored with fast food, which grew 30 percent worldwide from 2011 to 2016, compared with 21 percent in the US, according to Euromonitor.

“At a time when some of the growth is more subdued in established economies, I think that strong emerging-market posture is going to be a winning position,” Mark Schneider, chief executive of Nestlé, recently told investors. Developing markets now provide the company with 42 percent of its sales…..