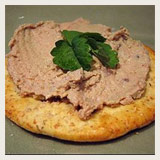 An increasing number of food-poisoning outbreaks in Britain are being caused by undercooked chicken livers. This increase has occurred at the same time as some celebrity chefs are advocating cooking livers for only a short period, recommending that the livers be served pink in the middle.

But this trend to serve rare chicken livers is potentially exposing the public to the risk of food poisoning caused by Campylobacter bacteria. Each year, there are 250,000 cases, of which about 100 are fatal.

In a study carried out with colleagues from the universities of Bangor, Manchester and Liverpool, we presented 140 chefs from around the UK with a set of photos of cooked chicken livers and asked them to select the dish they would prefer to serve. The photos differed only in how pink the livers were.

More than half the chefs we surveyed preferred livers so rare that they would not have reached the 70°C required to kill the bacteria. However, chefs were generally able to identify the appropriate cooking time and the photos which would meet Food Standards Agency recommended cooking times. This suggests that they were aware of the risk of undercooked chicken livers, yet preferred to serve them pink rather than adhering to safe cooking guidelines. Even recipes by celebrity chefs advocate cooking times that are insufficient to kill off the Campylobacter.

We also surveyed 1,030 members of the public. While there was a gap between what chefs wanted to serve and what they knew met safe cooking guidelines, we found the public were consistent in wanting to eat what they thought was safe. However, they weren’t good at identifying the safely cooked livers.

Unfortunately, in restaurants – where chefs are the “experts” – the customer is likely to place their trust in a chef’s cooking decisions.

Our study involved a laboratory experiment in which chicken livers were dosed with Campylobacter, cooked for times recommended by several celebrity chefs and tested for Campylobacter survival.

Half (52%) of chefs surveyed preferred to serve livers that would not reach a core temperature of 70˚C and could have Campylobacter survival rates of between 48% and 98%. One fifth (19%) of the public also chose such livers.

Minute doses of Campylobacter have the potential to cause infection and illness and the presence of any of the bacteria in cooked livers is a health threat.

Given the Campylobacter prevalence rates among raw chicken livers being sold in the UK (81% to 100% externally, 90% internally), these results raise concerns about food safety, as considerable trust is placed in the hands of chefs to cook chicken livers to the required food hygiene level.

The purported quality of the chef and restaurant were no guarantee of safe food, as chefs holding senior positions preferred to serve livers pinker than did their less experienced colleagues holding junior positions in the kitchen.

Chefs’ preferences, rather than their ignorance of Food Standards Agency guidelines, seem to be driving their cooking behaviour.

The increasing preference to serve undercooked chicken livers is part of a broader trend towards rarer meats. The trend has extended from meats, such as steak, to beefburgers and chicken livers for which the food safety implications are very different. These findings have serious implications for public health.