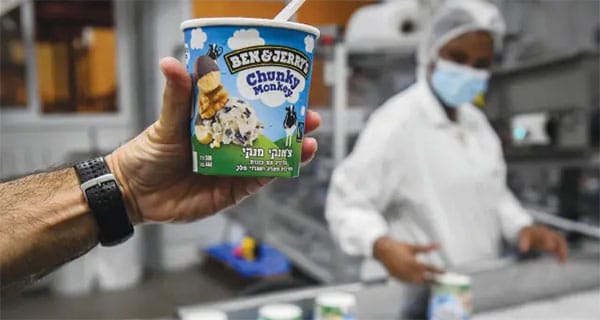 Ben & Jerry’s has filed a lawsuit against its parent company, Unilever, to block the sale of its Israeli business to a local franchisee. This whole saga has provoked much sound and fury, for and against….

In July 2021, Ben & Jerry’s announced that the brand would no longer sell its products in the occupied Palestinian territories, saying it was “inconsistent with our values”.

Ben & Jerry’s filed suit against its parent company Unilever in an effort to block its sale of the Vermont-based brand’s Israel business to a local franchisee.

The left-leaning ice cream brand, which is known for championing liberal causes, alleged in a complaint filed in US District Court in Manhattan that Unilever’s “unilateral decision” was made without board consent.

The ice cream company said an injunction blocking the sale was “essential to preserve the status quo and protect the brand and social integrity Ben & Jerry’s has spent decades building.”

Ben & Jerry’s board of directors voted 5-2 to authorise a legal filing against Unilever, according to details included in the brand’s complaint. The dissenters were two directors appointed by Unilever.

The company asked a federal judge to block the transfer of Ben & Jerry’s trademark and brand rights to any entity that would sell the product or use its logo in the West Bank without prior board approval.

This story is a Fast Company “Brand hit or miss of the week”, a hit for B&J in this instance. Watch this video explainer, click on the pic below…..

More background to this story

Not everyone thinks alike…. The move by Unilever to sell its Ben & Jerry’s division in Israel to its local franchisee – who will continue to sell the product under the famed brand name to customers in both Israel and the occupied Palestinian territories – was hailed by the Israeli government as a “victory over anti-Semites”— months after the founders of the Vermont-based ice cream giant announced they would no longer sell the popular product to customers in Jewish settlements on the West Bank.

“The anti-Semites won’t defeat us,” Foreign Minister Yair Lapid said. “Even when it comes to ice cream. We will fight efforts to delegitimise Israel and the boycott movement in all its forms, whether it be economic, cultural, or philosophical.”

Avi Zinger, the owner of American Quality Products, the Israeli company that owned the licensing agreement to exclusively sell Ben & Jerry’s in Israel, paid an undisclosed sum of money to Unilever.

Zinger announced that he would resume sales of the Ben & Jerry’s brand in both Hebrew and Arabic throughout Israel proper as well as the territories Israel captured in the 1967 Six-Day War.

The Israeli government makes no legal distinction between the Jewish settlements in the West Bank and Israel proper. The international community does not recognize Israeli claims over land that it captured during the Six Day War.

Earlier this year, Zinger filed a lawsuit in federal court against Ben & Jerry’s after the company refused to renew his license because he would not abide by its policy to halt sales of ice cream to Israeli settlements.

Ben and Jerry’s Jewish co-founders, Ben Cohen and Jerry Greenfield, sold their namesake company to Unilever in 2000 for $326-million.

As per the terms of the acquisition agreement, Ben & Jerry’s had autonomy when it came to taking decisions about its social mission. But a Unilever spokesperson has said that the ice cream maker’s corporate parent had discretion to decide on restructuring or selling parts of the business.