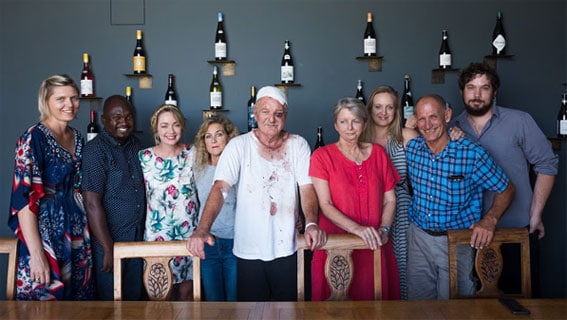 The ever-innovative and irrepressible Charles Back of Fairview Estate in Paarl has survived a brutal attack at his farm in which he suffered a number of broken bones, making it into work the next day to demonstrate what “real work commitment looks like”.

On Tuesday evening (Feb 13) Back was set upon by three people at his farm in Paarl. He was beaten up with a crowbar, suffering broken bones as a result, and was rolled up in a carpet and “left for dead”.

He describes the attack as “physically and emotionally painful” and that his escape “is nothing short of miraculous” and that he feels as if he has “come back from the dead”.

What is all the more remarkable, however, was that Back still made it into work the next day.

“I decided to come straight from the hospital and stop by Fairview, to show my Millennial counter-parts what real work commitment looks like, as on-going banter we have between us,” Back said.

He was beaten up by what he refers to as “three common gangsters” and does not believe that the attack was “politically divisive in any way”.

In his statement, he referred to the “ongoing farm attacks” which are taking place across the region.

In September last year, fellow winegrower, Joubert Conradie, was shot and killed at his farm in Stellenbosch.

“I am so grateful to be alive, and my heart goes out to all the people that have lost their family members in the ongoing farm attacks,” said Back in his statement.

“I want it to be known that this attack was not politically divisive in any way, but that these were just three common gangsters motivated by their own self-interests. I believe in the values that this country was built on, and continue to hope for harmony and peace.

“I am now doubly motivated to come into work everyday, and will continue to ensure that I can contribute and try make even the smallest difference in my community”.

His story has resonated strongly with South Africans, with his post had receiving almost 1‚600 comments by 7pm on Wednesday‚ most of them praising his fortitude and positive attitude.

Police spokesman, Sergeant Noloyiso Rwexana, said the intruders stole electronic items and a gun. No arrests have been made.