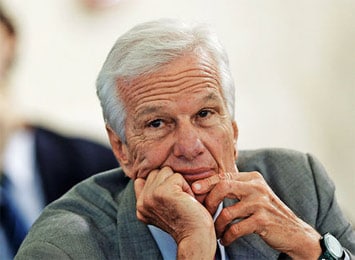 12 Mar 17 Barbarians at the plate: 3G missed Unilever but its methods are spreading

The investors who own Kraft Heinz are upending the food industry…

Jorge Paulo Lemann (above), a Brazilian investor, is ill-accustomed to failure.

On February 17 Kraft Heinz, backed by Lemann’s 3G Capital, said it had bid $143bn for Unilever, a maker of food and personal products.

3G has gobbled many a consumer firm, slashed costs, then bought an even bigger one. Even so, the Unilever bid was surprising in its audacity — the merger would have been the second-largest ever. As shocking, it collapsed two days later.

Kraft Heinz had hoped to continue talks in private, but news of its offer leaked out. Its management appeared to have badly misjudged the depth of Unilever’s attachment to its culture and its pursuit of long-term, “sustainable” growth.

Unilever’s outright rejection meant that 3G and Warren Buffett, who was expected to help fund a deal, faced the prospect of going hostile against a revered firm.

It was a rare stumble. But the episode doesn’t spell the end of its model. More deals are likely. And Kraft Heinz is already changing how Unilever and other rivals operate.

Times are hard for big consumer companies, once among the world’s most stable. Shoppers increasingly want products they deem healthier, more natural or “authentic”. New competitors have emerged online.

Food companies are experiencing a particularly sudden shift. The volume of products sold by big American food firms has dropped even as they have cut prices for consumers, notes Alexia Howard of Sanford C Bernstein, a research firm.

This month General Mills and JM Smucker, two food manufacturers, lowered their estimates for future revenue. Nestlé, a Swiss food giant, has just abandoned an overly ambitious sales target which it had missed for four years in a row.

After 3G applies the method at one company, it buys another and fuses them. Lemann and his partners combined a striking number of big brewers to form Anheuser-Busch InBev; last year it acquired the firm’s next closest rival, SABMiller. Kraft Heinz was formed through deals that also involved Buffett. On February 21st another company backed by 3G said it would buy Popeyes, a fried-chicken chain, for $1.8bn.

The perception of 3G’s ruthlessness comes chiefly from the fact that it has overseen the sacking of thousands of workers at the firms it owns.

Kraft Heinz decided to close seven factories in North America, boosting its profits. Its sales have fallen in four of the six quarters since the two companies combined, grist for those who say that slashing costs limits growth.

Others deem its strategy admirably clear-eyed. 3G likes to foster an “ownership mentality” among its managers, with financial rewards linked to the company’s performance.

Kraft Heinz looks after promising brands, such as Heinz mustard. Where necessary, it allows ailing lines to wither.

Unilever, by contrast, continues to support its declining spreads business, arguing that it still produces cash. Calls to dump the division are by now so intense that Warren Ackerman, an analyst at Société Générale, a French bank, calls the potential move “Sprexit”.

It is not all cuts, either: Kraft Heinz will significantly increase spending on advertising this year…..