03 Aug 16 Bad sausage and the discovery of botulism

“A lot kills, a little cures,” wrote the father of toxicology, and botulinum toxin is the poster child for this important pharmaceutical concept. Here’s a fascinating look at the history behind one of the most deadly toxins known to man, and a dreaded possibility in food manufacturing.

Depending on the dosage and route, this potent bacterial toxin is either a devastating foodborne poison – one of the most deadly toxins known to man, capable of causing paralyzing death – or a wildly popular wrinkle antidote, harnessed and wielded in the pursuit of clearer skin.

Yes, botulinum toxin, or Botox, is best known for its use in cosmetic treatment, smoothing facial crinkles and crow’s feet, but its applications go far beyond the superficial: botulinum toxin can quell migraines, deactivate excessive sweating and salivation, and alleviate painfully contracted limbs in people with cerebral palsy.

The therapeutic wonders of botulinum toxin and its wide range of medical applications have only been fully realised since the 1980s, but an inkling of appreciation for the vast possibilities of this powerful neurotoxin were first appreciated over 200 years ago in the work of a physician poet with a passion for psychic phenomena and marionette theatre.

This young doctor, Justinus Kerner, was the first person to identify botulinum toxin as the causative agent of a series of devastating outbreaks in Germany caused by suspiciously bad sausages.

He is renowned for not only providing the first systematic clinical description of the toxin’s effects but also for testing it on himself and accurately prophesying its use as a curative for a variety of medical ailments.

Food-borne botulism is the unhappy culmination of consuming food contaminated with the botulinum toxin or with spores of the bullet-shaped microbe Clostridium.

This bacteria is a hardy organism, found in soil throughout the world. The microbe can contaminate produce and meat and, in warm conditions where oxygen is lacking, will produce the botulinum toxin.

In the late 1790s and early 1800s, the Kingdom of Württemberg in southern Germany was plagued with sausages gone bad.

Amidst the ongoing Napoleonic Wars from 1803 to 1815, adequate food production was stymied by poverty and lapses in food hygiene. Cases of fatal poisoning spiked in the region, prompting the capital of Stuttgart to issue an edict in 1802 on the dangers of the “harmful consumption of smoked blood-sausage”.

To put the scientific landscape in perspective, just a half a century prior, witches were blamed for outbreaks of food poisoning and the concept that bacteria might sicken us wouldn’t emerge for another hundred-odd years. 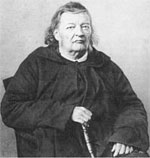 Amidst the paralysis and death by sausage in Württemberg, many assumed the poisonings to be the result of ingestion of prussic acid, otherwise known as hydrogen cyanide, and yet Kerner (left), a 29-year old medical officer living in the Württemberg region had a hunch, a radical idea at that time and age, that the food poisoning was caused by an organic, biological poison.

In 1820, Kerner published his monograph detailing 76 cases of “sausage poisoning”, systematically chronicling this strange syndrome, which he observed to attack the gastrointestinal tract, the neuromuscular network, and the autonomic or “fight-or-flight” system.

This would be the first accurate description of the clinical presentation of food-borne botulism.

He accurately noted that his patients’ cognition and sensory system remained intact, though their muscles became weak with signs of neurological impairment. The cause of death from botulism, he discovered, was ultimately through respiratory and cardiac failure secondary to muscle weakness…..