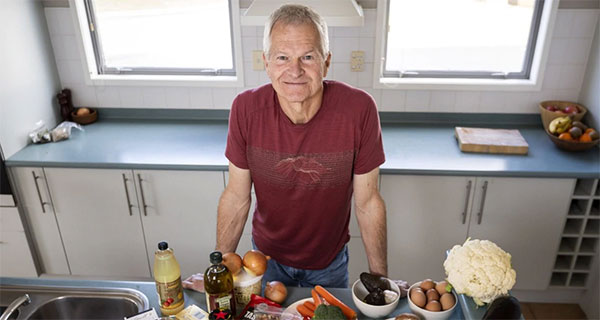 26 Aug 19 Back from the brink: how I reversed my T2 diabetes

Being diagnosed with out-of-control type 2 diabetes was a shock for Stuff science writer, John McCrone. But is this how we can all fight back? [Brilliant & enlightening read, great explanation of diabetes aetiology and how to reverse it. Ed]

Whoa. Not just diabetes, but completely red-lining it. Fair to say that as a slimmish, fittish, 60-ish, white male, I wasn’t expecting the diagnosis.

Perhaps skin or bowel cancer. Those would seem more my risks. Yet here I was.

My surprise was mixed with guilt and embarrassment. Somehow I had screwed up. But where exactly?

My doctor appeared lost for a ready answer. He was muttering something vague about a “decompensation” – a stressed body finally giving out – as he pushed a diabetes guide across his desk.

Absorb the shock, he advised. Then come back for the pills and likely the insulin pump which could be my lifetime companion now I had succumbed to this nasty disease.

Type 2 diabetes mellitus. A sugary rot produced by an excess of blood glucose adhering to the body’s proteins, gumming up its works in every direction.

I would be falling apart by stages for about the next 20 years – if a diabetes-prompted heart attack didn’t carry me off rather sooner.

How could it have happened? In the mirror, I had to admit to about 5kg of middle-age spread. And in particular, there was a bulge, a distension, just under the rib-line.

Better informed, I can now read that as a fatty liver. However, nothing seemed that out of control. I could still stand up straight and mostly suck my gut out of sight.

And while I had always indulged freely with cake and chocolate, I believed I was compensating with healthy food too.

Lean cuts of meat, tons of vegetables, and enough of the good carbs – the recommended “food pyramid” foundation of potatoes, bread, rice and pasta – on my plate.

I had also exercised hard all my life. Given the calories in/calories out principle, my feeling was I would have been burning off the worst of any excess dietary sugar along the way.

So an unlikely candidate for diabetes. However confession time. My annual blood test had shown an HbA1c reading – the measure of your average blood glucose – that had crept up into the official pre-diabetic zone.

My last result had hit 46 millimoles per mole (mmol/mol). On the coloured “speedometer” chart doctors use, this was still in the green, but paling towards a cautionary yellow.

The warning had been easy enough to shrug off. I reasoned the change looked a gradual thing. There would be plenty of time to do something about it. Check back in another year.

Yet now, barely six months later, my HbA1c had rocketed to 99 mmol – straight into the screaming red zone.

I was broken. And the clue to how bad was that the diabetes speed dial actually topped out at 100. So off the road, down the ravine, tumbling into oblivion, I had to guess.

I was looking for a better explanation than just a decompensation – something snapping. But my 10-minute appointment was over. The doctor had his “time’s up” face on. The essential news had been delivered.

Being a journalist and science writer – used to getting answers – I went straight home and got stuck into researching my diagnosis. Thank goodness for Google, YouTube and internet discussion forums.

Three months later I was back at the surgery for a follow-up HbA1c result. My blood glucose had dropped to 56. Down from panic stations to merely serious alarm.

Another three months and it was right down to 35. Not even pre-diabetic anymore. Normal range. To all intents and purposes, fixed.

I was disappointed that my doctor didn’t fall off his chair in amazement, only furrowed his brow in mild curiosity.

Conventional wisdom says there is no cure for diabetes. You just use drugs to mask the worst of its symptoms.

However, I had been lucky with my timing. With diabetes reaching epidemic proportions across the world, it looks like our medical understanding of it is also being turned on its head.

John McCrone’s focus on a low carbohydrate diet has helped to turn around his blood glucose levels.

As basically a lifestyle disease, a drastic lifestyle change can – if not fully cure it – put it into remission. Or at least that is what my own story appeared to prove.

What did I do? The short answer.

After poring over the many contrasting opinions offered up by the internet, I arrived at the low carbohydrate/high fat (LCHF) diet. Or as some prefer to call it, the low carb and healthy fat diet.

Simply put, take away the fuel of diabetes. Get rid of all dietary sugar. Even your fruit intake needs to be limited.

And then restrict anything starchy as well. Potatoes, bread, flour, oats, rice, noodles, pasta – all the stuff which is one step away from being converted to sugar.

Even if standard dietary wisdom is that these are necessary staples, the message is starve the disease.

Yes, I found it a daunting thought too. As humans, we are our habits. I couldn’t even imagine mealtimes with these basics missing.

However I got started. Out went marmalade and toast for breakfast, my morning routine for any number of years. In came a couple of eggs scrambled with a large knob of butter. Just that. It looked rather naked and alone on the plate.

Lunch became more eggs – usually fried with bacon or some other protein – laid on a crunchy bed of green veg and salad. At least on an LCHF diet, you can still eat all the broccoli and cabbage – low density carb – you could possibly want.

Dinner continued to be roasts and stir fries. Just reinvented to be without potatoes, rice or pasta.

Dessert was reduced to a single square of 90 per cent dark chocolate. Snacks were a handful of nuts or a cracker piled as high as I liked in peanut butter.

A blessing of the LCHF diet is that fat is back on the menu. It is how you fill up. And as the LCHF pundits promise, the diet is naturally satiating. So you shouldn’t end up overeating.

Sugar only turns your appetite on. After one biscuit you are always ready for another. It is an evolutionary thing.

Our hunter/gatherer ancestors were hard-wired to gorge on fruits and berries when they became available during a brief few summer weeks – a once-a-year passing treat.

But protein turns our appetite off. We know when we have had enough. So once the habit of having sugar and starch at every meal is broken – that built-in expectation – there is no particular nagging craving.

In the dread zone: The blood glucose “speedometer” telling what HbA1c reading is out of control.

I didn’t believe it would be the case either. Yet I discovered it was true after I tried.

As well as seeing my blood sugar plummet back to safe levels, I found my waist band shrinking by whole sizes. I was having to punch new holes in my belts, cinch in my trousers, then eventually just go out and buy a new wardrobe.

Another unexpected bonus of joining the LCHF club was it appeared to put me in the middle of everything trendy.

Of course I was only what low-carbers call an n=1 experiment – a single patient clinical trial. Fair warning. My experience might not be your experience.

But how could I doubt the evidence it was working? And the more I looked into the theory behind low carb, the more it seemed to make perfect sense.

Falling out of balance

YouTube was a great resource. You get to look over the shoulders of scientists as they present their latest research findings in lectures and conference sessions.

New Zealand has its own community, led by Professor Grant Schofield at Auckland University of Technology (AUT), along with others at his Human Potential Centre, like Dr Catherine Crofts and Dr Caryn Zinn.

It has also been moving from the medical fringes – a subject largely for physiologists, nutritionists, sports scientists and family doctors – to the mainstream.

In 2018, the reinsurance giant Swiss Re teamed up with the British Medical Journal to put on “Food for Thought” in Zurich. LCHF as an answer to diabetes is on the map.

I listened. And what I picked up about my own plight was that after years of silent abuse, I must have finally burnt out my pancreas.

That decompensation was an abrupt failure of the pancreatic beta cells which produce the body’s insulin. And it could have been a collapse 20 years in the making……