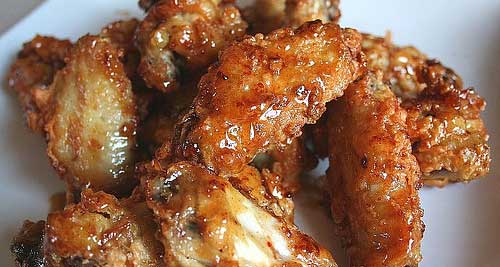 Chicken wings are one of the hottest American foods – and Americans are eating so many that their appetite is sending prices to a record and helping lift profits for poultry processors.

Once lumped with chicken bones and feathers as undesirable poultry byproducts, wings have had a fast rise to delicacy status.

Industry observers say the shift happened in just the past couple of decades, as restaurants persuaded diners to view wings slathered in spices and sauce as a celebratory group appetizer.

“Food service traffic and demand in the US remain below pre-recession levels, but demand from and the popularity of local chain concepts and restaurants that focus on wings are offsetting reduced traffic at casual dining restaurants,” said Sanderson Farms,  the third-largest US chicken processor, in its third-quarter earnings statement.

Jumbo chicken wing prices rose to a record this month as supplies were eaten up as quickly as they could be produced, according to market research firm, Urner Barry.

Americans ate more than one billion restaurant orders of chicken wings in the 12 months ended in June, according to NPD. Servings at casual-dining restaurants rose 5%.

And people ate more wings at home: Sales of frozen chicken wings rose 12% by volume in the past year, Nielsen said, with average prices rising 15%.

Along with the rising number of sites for themed US chains such as Buffalo Wild Wings and Wingstop, a rising number of pizza restaurants, grocers and convenience stores are selling the items, say the market researchers.

The number of Buffalo Wild Wings locations, which includes franchises and the company’s R Taco and Pizza Rev restaurants, have almost trebled in the past decade, while Wingstop has almost doubled.

Customers can order wings with their pizza from Domino’s and pick up wings for dinner while shopping for groceries.

A 40% increase in jumbo wing prices during the quarter helped Sanderson, the third-largest US chicken processor, top analysts’ average profit and sales estimates during the fiscal third quarter.