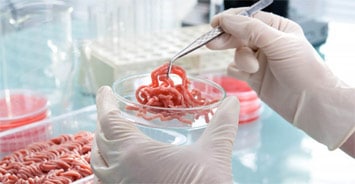 There could be a future where we eat incredible, sustainable, engineered foods—3D-printed or lab-grown meals, chemically optimised to unleash the perfect combination of flavour and nutrients to fit our bodies and our tastes. But only if we start paying attention to our food scientists….

Better tasting hot dogs with harmful fats removed! Healthier snacks with accurate expiration dates! Or, we can continue on our present path, and Americans will keep eating the same foods we always have, including foods that make us sick and obese.

If the United States would like a say in the future of food, the government and the people need to start paying attention to our food scientists.

Take Karen Schaich, a Rutgers food science professor who studies the very nature of how food ages. Schaich observes how common foods like tortilla chips and peanut butter go rancid, and believes she’s found processes that cause food to spoil faster than we think. But she struggles to get this important research funded.

She’s not the only one—American food science itself is struggling, and for more reasons than funding alone.

We have food science programs, but some of the food scientists that I spoke with find it difficult to attract the funding needed to innovate and come up with novel solutions to food science and nutrition issues through basic research. Others left publicly-funded food science for greener pastures in private industry.

Not all American food science is suffering, Allen Foegeding, professor at the North Carolina State Department of Food, Bioprocessing and Nutrition Sciences, told Gizmodo—he noted that the fields of sustainability, microbiology and food safety have seen lots of attention.

Instead, what’s lagging is what some people called food innovation, or interdisciplinary research combining the fields of physics, chemistry and engineering to understand food down to its molecules to create solutions for the future.

Right now, the alphabet soup of federal agencies (NIH, NSF, and USDA through NIFA) and private funding sources supporting food science research in the United States don’t have a shared stated goal or direction. And while many startups are trying to be innovative, private innovation prevents the spread of knowledge for other scientists to build on.


“The situation in the US is sad,” said Alejandro Marangoni, professor in food science at the University of Guelph in Canada.

Marangoni should know—his Canadian lab innovates with the structure of fats and oils, replacing unhealthy fats with oil and cellulose-based gels in products like hot dogs, or imaging milk fat using high-powered microscopes.

Sure, the United States has scientists doing work like Marangoni’s, but it doesn’t seem to him and scientists like him that American food research has a central, forward-looking goal.

“We need more of that type of conversation at the country level and decide where we need to be putting our money to help society move forward,” said Foegeding……