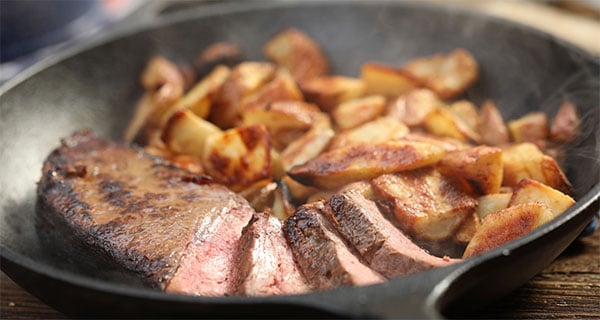 A new class of fungi-based steaks, cultivated from a fast-growing micro-organism, may be a paradigm-shifting meat alternative.

A US startup in Boulder, Colorado-based startup has opened a new frontier in the world of vegan meat replacements. The company, Emergy Foods, has just announced the imminent launch of a brand called Meati Foods — the world’s first line of fungi-based steaks.

At first glance, Emergy appears to be another company jumping on the plant-based bandwagon. Across the food sector, well-financed companies are racing to replicate the taste and texture of animal protein without actually using meat. But this new offering is fundamentally different from Beyond Beef and the Impossible Burger.

While most alt-meat products, from veggie patties to fake-chicken nuggets, approximate the finely minced texture of ground meat, Meati strives to emulate whole animal muscle. The result is geared more toward the steakhouse than the drive-thru.

In a press release, the company calls itself “the first in market to produce whole cuts of plant-based meat in the form of steak and chicken breasts.” That’s a bit of a misnomer, though. Fungi aren’t plants at all, but a distinct, often-maligned biological kingdom with their own unique characteristics.

While finished Meati steaks will contain a small amount of plant ingredients, they’re made mostly from filamentous fungi, a kind of fast-growing micro-organism that branches quickly into thread-like networks of cells called mycelium. (Citing intellectual property concerns, the company wouldn’t say which strain or species it is using.)

The process means Emergy’s production procedure can take place entirely in a lab or factory, sidestepping agriculture completely, and opening up a new universe of sustainability implications.

The company was founded in 2016 after two PhD students at the University of Colorado, Boulder, decided to apply their scientific expertise to the realm of food.

Together, the two have co-authored more than a dozen studies on a range of topics, including renewable lithium batteries, charcoal-based water filtration systems, and the ways fungi can be used to bioremediate highly polluted environments.

Huggins says the pivot to food was a way to maximise impact, though it’s unclear whether he means the environmental or economic kind. You couldn’t blame the pair for seeing dollar signs: according to data from the Plant-Based Foods Association, an industry lobbying group, US sales of plant-based meat are up 10 percent since 2018.

Emergy Foods is riding the wave of that excitement, raising $4.8-million in venture capital from eight investors this July.

While the UK-based company Quorn has been making mycoprotein — protein from fungi — for decades, that company’s “beef” products are ground or cut into small strips for tacos or stir-frys.

Emergy is the first company attempting to use mycoprotein for a truly steak-like fake meat, something you might enjoy in a restaurant with a white tablecloth. Still, Huggins points out that his company’s proprietary production process has some similarities to traditional foodmaking techniques used throughout the world.

Miso, soy sauce, and sake are all made by fermenting soy or rice with mould spores known as koji, or Aspergillus oryzae, a filamentous fungi prized in Japan. And Tao Zhang, co-founder of the plant-based impact investing firm, Dao Foods International, says Chinese cuisine has long used fungi to impart a meaty flavour to otherwise vegetarian meals.

But while those methods use fungi to ferment or flavour plant material, Emergy’s approach is different. In its case, the fungi are not a processing agent, but the final product. The company grows its own mycelium in a submerged fermentation process, feeding them on sugar water.

The approach is a little like cheesemaking, Huggins says, since the product is cultured in large stainless steel vats, then harvested. Fungi-based meatmaking also superficially resembles the still-experimental process used to produce cell-cultured meat, an emerging approach that entails growing animal cells inside large bioreactors. But, Huggins says, fungi have a major advantage over their animal-cell cousins.

“Animal cells don’t have their own digestive system,” he says. “They don’t have the capabilities, the mechanics to actually break down complex carbohydrates or sugars into something that they can use as energy.” After all, isolated cattle cells in a test tube lack the stomach the full-grown animal has. Emergy’s production procedure can take place entirely in a lab or factory, sidestepping agriculture completely.

“That’s where fungi come in,” Huggins continues. “They are very versatile because they have their own digestive system. They can break down a variety of different carbon sources, sugar sources in order to convert it into energy and ultimately grow and produce more proteins.”

Fungi come naturally equipped with the biological capabilities cultured meat startups are still trying to get animal cells to replicate.

At the same time, the ability to subsist on sugar water may give fungi steaks a sustainability advantage over plant-based burgers. Standard plant-based meat replacements tend to be made of soy, wheat, and pea protein, as well as other grains, legumes, and pulses. These commodity crop ingredients not only require lots of land to grow, which can lead to deforestation, but they also tend to require synthetic fertilizer, herbicides, and insecticides, which can lead to environmental problems of their own.

Huggins says that his mycelium, in contrast, can live on ingredients other companies might throw out. In theory, he imagines a system where he can feed his fungi on the sugar-water created as a byproduct of the beer-making process — a natural resource that is in abundance in Colorado.

Since the Brewers Association, an industry trade group, estimates that breweries waste seven barrels of water for each barrel of beer produced, Emergy could become a badly needed customer. From there, Huggins says, the production process creates no waste byproducts that can’t be plugged back into the system — for instance, residual sugar water that can be fed back to the fungi.

“Basically, we just need a sugar source,” Huggins says. “That’s true whether we buy that at a grocery store or, ultimately, down the road, partner with another food or beverage processing company and use their residual sugar that goes to waste. That’s still food grade, and still very nutritious. We could use that as a feedstock and create a truly circular-based protein production process. That would be a game-changer in this space.”

As they grow, the mycelium also naturally solve another problem cell-cultured meat companies are still struggling with: the challenge of mimicking muscle tissue. When replicated in a petri dish or steel vat, animal cells make only more animal cells, and not sinew, tendon, muscle, bone, or fat—the things that make a steak feel like a steak. That’s why the experimental cell-cultured meats currently being developed (and fed to curious reporters) tend to be foods like sausages and chicken nuggets, which can absorb a certain amount of shapelessness.

While scientists are exploring a number of methods to make cell-cultured meat more steak-like, including using scaffolds made from decellularised plant husks, they haven’t yet succeeded. But Emergy’s mycelium naturally grow with a structure that lends itself to the steakhouse.

“It’s not easy to do and it’s taken us almost over two years in order to develop,” Huggins says. “But what’s so great about mycelium is it has a fibrous nature that mimics muscle structure.”

While the texture is more inherently meat-like, Emergy faces a different hurdle: taste. While plant proteins can be broken down into different molecular components, isolating or highlighting certain sensory characteristics, mycelium tend to have no flavor. When I asked an Emergy spokesperson about this, she confirmed that the product’s main ingredient is tasteless. It’s a completely blank gustatory canvas.

The challenge, then, will be to make Meati steaks taste like something people want to eat. Huggins suggests that, eventually, the company may be able to impart more flavour through the fermentation process. For now, it uses a variety of vegetables and spices to create flavour; the final product, which Emergy says includes fewer than five functional ingredients, is a blend of 90 percent mycelium and 10 percent other ingredients.

Emergy wouldn’t tell me the exact recipe, citing the fact that the formula is still evolving. But company representatives did confirm Meati products aren’t made with soy, wheat, or pea protein, which tend to be primary ingredients in plant-based alt-meats.

What does the result actually taste like? At a private lunch hosted by the company, I found out….