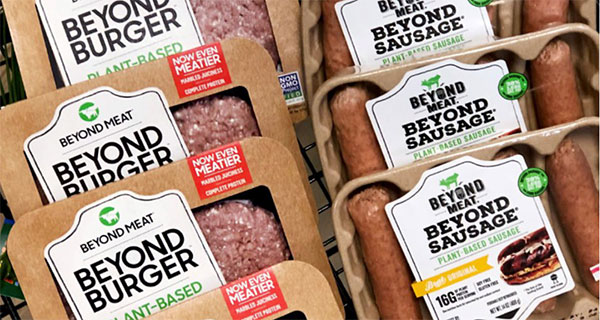 Beyond Meat, arguably the highest-profile plant substitute meat maker, looks to be in some trouble. This commentator is not surprised…..

The California-based player that raised a billion dollars to fund its ambition to get consumers to switch away from meat, has reported falling retail sales in the key US market, and a collapse in its gross margin and mounting losses, reports New Nutrition Business.

As Chart 2 below shows, Beyond’s sales in US supermarkets have fallen to pre-pandemic levels. The $1-billion US meat substitute category, which grew by 10% in the year to September 2021 (IRI data), is the world’s single biggest meat substitute market and the most important market for Beyond, which had achieved a 23% share, putting it in second place to Kellogg-owned Morningstar, a meat substitute brand created in 1985.

“Underperforming on taste and texture and with 20-strong ingredient lists (had they forgotten that ‘clean label’ is a consumer need?), the brand was never aligned with consumer preferences,” notes NNB’s director, Julian Mellentin.

Beyond has never made a profit – cumulative losses on its balance sheet are $296-million. Unsurprisingly, the company’s COO ‘stepped down’ in September.

“Plant proteins have a good future – but not with this strategy. As we have said before, a Silicon Valley growth model is being shredded by contact with reality,” asserts Mellentin.

“A surprisingly large number of plant-based business models have ignorance of the consumer and the food & beverage market baked into them. Beyond is only the most conspicuous example.”

“We’ve seen a big deceleration. “Plant-based meats don’t make up 50% of the market or 25%. Despite all of the noise, it’s 1.5% of meat sales. It’s still relatively small.”Chris DuBois, senior vice president of IRI’s protein practice