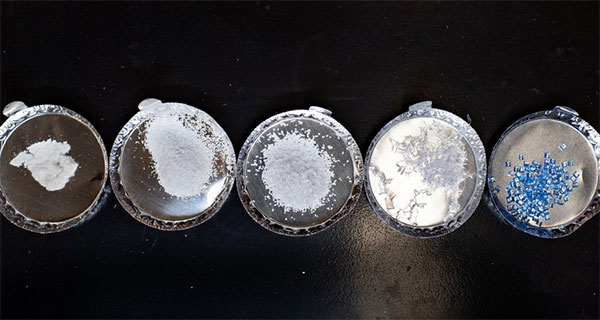 Ting Lu and Stephen Techtmann, winners of the 2021 Future Insight Prize, are developing a process that turns plastic into protein powder, which they believe could help address the mounting global eco-plastic crisis.

When Ting Lu and Stephen Techtmann were notified they were finalists for the Future Insight Prize awarded annually by Merck, the two scientists thought the email was a scam, said Lu, a bioengineer at the University of Illinois at Urbana-Champaign. Added Techtmann, a microbiologist at Michigan Technological University: “It was an out-of-the-blue thing.”

But the €1-million grant the pair of researchers ultimately won for developing a way to turn plastic into protein powder was very real. The partners (pictured below) will split the award and use it to further their innovative chemistry, which they believe could help address the mounting global problems of plastic waste and food insecurity.

Such promise was why a jury of about 50 science laureates from around the world selected Techtmann and Lu from among several dozen serious possibilities for this year’s prize in the category of “nutrition to feed the growing world population.”

“The prize is based on a concept we call a ‘dream product’ — something that would be extremely great if it would exist, and that humanity really needs, but that can’t be realised with the current state of science and technology,” said Ulrich Betz, vice president of research for the company, based in Darmstadt, Germany, which isn’t affiliated with the US drug company Merck & Co and does business in America as EMD Group.

Merck established the Future Insight Prize three years ago for research in the company’s three business areas — health, nutrition, and energy — and vowed to continue it for 35 years to commemorate Merck’s 350th anniversary, in 2018. The first prize was awarded in pandemic preparedness in 2019; the second, in antimicrobial resistance.

Techtmann’s research on the biodegradability of plastics complements Lu’s specialty in engineering probiotic bacteria to create a potential double whammy: a system that could break down copious wastes from bottles and all sorts of other plastic into a compound that is fed to bacteria and yields cells consisting mostly of protein that can be harvested, dried, and ground into a flour-like food ingredient.

Lu and Techtmann met at a conference several years ago. Techtmann was focused on using bacteria to clean up oil spills, and Lu was genetically modifying organisms to enhance human health, such as by suppressing the growth of foodborne pathogens.

As they talked, it became clear to the two researchers that because plastic is derived from petroleum, there was potential to use bacteria to break it down in the lab, Techtmann explained. “Then Ting’s group could pair these bacteria with some they’re working on to support the growth of nutritional bacteria that can be used as food,” he continued.

The key is to break down the long polymer chains in plastic into their essential elements — carbon, oxygen, and hydrogen among them. “These things are so radically different, but if we look at them chemically, they contain a lot of similarities in the basic elements,” Lu said. “So we’re engineering microbes to convert them into a form that can be edible.”

The resulting fermented culture “looks very much like the yeasty product you get if you’re brewing your own beer,” Techtmann said. The researchers harvest the cells and dry them into a powder that’s akin in texture to commercial protein powders. Designer bacteria could be tailored to yield varieties that could be added to foods to enhance nutrition, improve storage time, resist pathogens, and even introduce therapeutic effects, Lu said.

The scientists are testing the safety of their product and hope to get it approved by the US FDA as “generally recognised as safe” (GRAS) a key imprimatur for commercialisation. Techtmann believes “we have promising results that we think we could scale over the next year or two with increased input material and volumes.” Lu said they want to expand the range of target plastics from the original PET.

Lu and Techtmann’s research initially was funded last year by $7.2-million from the Pentagon for research that could turn plastic waste into military supplies such as food, adhesives, and lubricants.

“If you get a Nobel Prize [for science], it’s private money, and you can just take it and do what you want with it,” Betz said. “But the Future Insight Prize is to catalyze further advancement. It’s not to honour what someone’s done in their life but to honour scientists who’ve already performed and shown they can do it — in the hopes they can do more.”