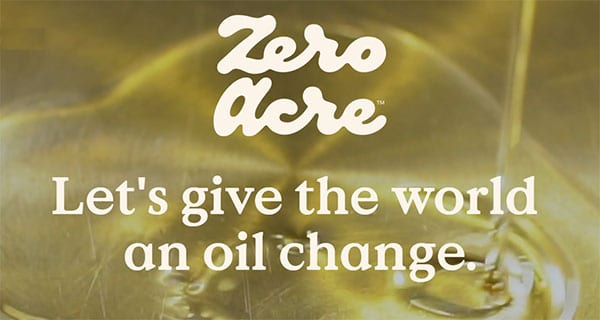 Zero Acre Farms is a US food-tech startup that’s looking to create a new category of healthy oils and fats.

Recently netting $37m from climate and food investors, including Robert Downey Jr’s FootPrint Coalition Ventures, Zero Acre Farms positions itself as a disruptor to traditionally farmed vegetable oils, creating next-gen ingredients that are made by “fermentation, not deforestation”.

“Fermentation is the original culinary art, after fire,” remarks co-founder and CEO Jeff Nobbs. “We use this ancient technique to produce oils and fats with significantly lower levels of the bad fats that have been linked to inflammation and disease while having a fraction of the environmental footprint.

“It’s like making beer but instead of producing ethanol, the microbes produce oil and fat — and a lot of it.

“We’re proud to be the first company stepping up with the mission to completely remove industrial ‘vegetable’ oils from our food system.”

They’re not the first to attempt this. C16 Biosciences is attempting to replicate palm oil via fermentation, and Xylome is trying to find alternatives to current biofuel production techniques. Synthetic biology, as it’s called when microbes are tuned to a specific purpose, is increasingly viable as the biotech infrastructure supporting it advances.

In Zero Acre’s case, they’ve tried to make it easy on themselves to get to market. Going up against Big Corn and Big Palm is a difficult proposition. Instead, the company is aiming at consumers who try to be ethical purchasers at the grocery store. The price will be higher, but Nobbs is careful to note that they’re not just leaning on the social good aspect.

“We’re not creating a synthetic oil that’s ‘only’ better for the environment,” he says. “It’s a new category of oils and fats, we can make compositions that are more suitable for food and better for people.”

And he adds that, unlike some substitutes, it doesn’t need any recipe modification or the like. “It’s a 1:1 replacement, not like using almond flour instead of wheat flour — you just use it instead of whatever product you’re replacing.”

Not only that, but it won’t produce weird fumes at high temperatures (he points out that no plant or animal has had reason to evolve biomolecules that survive 500-degree heat), and that the taste is actually cleaner due to not requiring the kind of processing and flavour masking other oils do.

But why, if there are so many advantages to such a synthetic, haven’t other companies with more resources attempted this before now?

“If you’re a big incumbent, this seems really small,” Nobbs explains. Oils aren’t just at the grocery store — they’re sold by the thousand-gallon tank to fast food chains or producers who need it as a basic ingredient. High-end cooking oil for home use is a rounding error to the biggest sources of oil.

“Our message is vegetable oil is bad. They can’t say that — they’re not going to shoot themselves in the foot economically like that.”

More pertinent to Zero Acre’s approach, there have been some recent advances on the technical side.

“There are a bunch of knobs and levers in the fermentation process: what’s the temperature, what’s the pH, how much oxygen are they given, what are they fed… as my co-founder jokes, what kind of music you’re playing in the lab,” Nobbs says.

“Little things can have a big effect. We have a whole platform around finding those optimal parameters. There’s still a lot of research to be done, but we’ve had some breakthroughs, and I think we’re working with the world’s best organisms for this.”

Due to the relative simplicity of the production process compared with precision fermentation for more exotic molecules, the company has already scaled the manufacturing process to “thousands and thousands of litres”, and plans to make its consumer debut later this year. They weren’t ready to reveal the final branding and packaging — that will be closer to the actual launch.

Zero Acre Farms outlines that vegetable oils – including soybean, sunflower, canola and palm oil – are now the most consumed food in the world after rice and wheat, and the fastest-growing sub-sector of global agriculture.

These ingredients are present in nearly all restaurant meals and packaged foods, making them difficult for most people to avoid. The increase in their consumption has been flagged as the single largest dietary change of the last hundred years and is linked to increased rates of obesity and chronic metabolic disease, including heart disease.

“I hope that by spreading awareness about the devastating effects of vegetable oils, more people will find healthier and more sustainable alternatives.”

Vegetable oils also take a massive toll on the environment. As Zero Acre Farms points out, more vegetable oils are produced globally than all beef, chicken, shrimp, and cheese combined, contributing to record rates of deforestation and carbon emissions.

Notably, it also pinpoints that two of the top three drivers of global deforestation are vegetable oil crops, soybean and palm oil.

The company’s Series A round was co-led by Lowercarbon Capital and Fifty Years., for a total of $37 million in funding to date. Other investors include S2G Ventures, Virgin Group, Collaborative Fund and celebrity Chef Dan Barber.

“There is a concern that the impacts of these constraints will not ease quickly.”

The FAO Vegetable Oils Price Index led the rebound in January, increasing by 4.2 percent month-on-month and reversing its December decline to reach an all-time high.

According to the latest FAO figures, quotations for all major oils rose, also supported by rising crude oil prices.

Palm oil prices were largely underpinned by concerns over a possible reduction in export availabilities from Indonesia, the world’s leading exporter, while soy oil prices were supported by robust import purchases, particularly from India.

On March 3, 2022 it’s bringing together a panel of MDs, PhDs, professors, doctors, and climate scientists to discuss the current issues with vegetable oils and the future of fat.