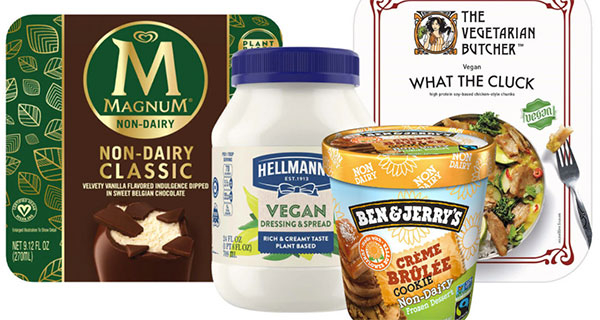 Unilever has said expanding its range of plant-based foods is one of its new strategic priorities as the FTSE 100 company zooms in on the fastest-growing consumer markets.

The group, with household brands such as Ben & Jerry’s ice-cream, Marmite and Knorr, wants to have a €1bn (£865m)-a-year plant-based foods business in five to seven years’ time. That compares with a €200m-business today.

With a growing number of people cutting their meat intake or giving it up altogether, Alan Jope, Unilever’s chief executive, described the rise of plant-based foods as an “inexorable” trend.

“We are seeing in every single country in the world a shift towards more plant-based diets, even in emerging markets,” he said.

The first step was creating plant-based versions of existing brands, such as the vegan Magnums and tubs of Ben & Jerry’s ice-cream already on sale. Hellman’s vegan mayonnaise, launched in 2018, was “doing brilliantly”, he added.

Unilever also wants to grab more of the upmarket beauty and nutritional supplement markets, which are also big growth areas, an ambition that means more deals are on the cards. Recent acquisitions include the wellness brand Liquid IV and SmartyPants vitamins, while it already owns upmarket beauty brands such as Dermalogica, Ren and Living Proof.

Analysts at Barclays have predicted the value of the global plant-based food and drink market could soar by more than 1,000% to exceed £100bn by the end of the decade. With the plant-based food market comprising lots of tiny businesses, acquisition targets for Unilever are less obvious than in other sectors. However, Jope said if it identified a promising candidate, “we will take a look at it”. It already owns meat substitute brand The Vegetarian Butcher.

The group, which owns more than 400 brands, reported a 6% drop in underlying profits to €9.4bn on sales of €50.7bn on the back of a “volatile and unpredictable year”.

The lifestyle changes forced upon consumers by the pandemic mean the company has had to manage seesawing levels of demand over the past 12 months. While shoppers filled kitchen cupboards with Hellman’s, Pot Noodles and Cif surface spray, they cut back on its shampoos and deodorants. It was also hit by the closure of the restaurants and cafes it supplies with ice-cream.

The Anglo-Dutch company, which manufactures 80% of the goods it sells in the UK on these shores, said it had experienced some Brexit-related teething problems, particularly around the flow of goods into Ireland, although the situation had since improved. “The next wave of rules are kicking in on 1 April and our team are very busy preparing to make sure that goes smoothly,” said Jope.

The shares closed down 6% at £40.67. The figures were never going to “set the share price on fire”, said Dan Lane, a senior analyst at investment platform Freetrade, who said even big consumer firms such as Unilever were carrying battle scars from the pandemic.