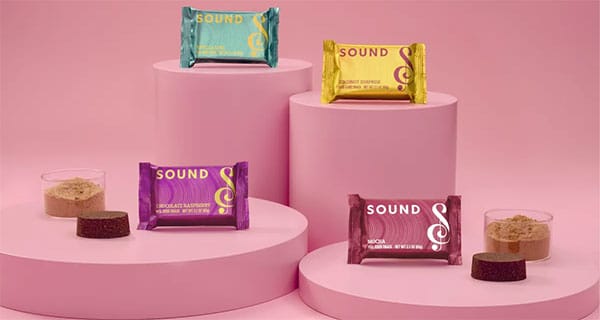 Protein bars quickly become a global favourite – a snack of everyone from athletes to office workers – as a convenient approach to fuelling up on a strenuous day. The market is huge, and is expected to reach $7-billion by 2027.

Jumping on the protein train, a start-up called SOUND Nutrition is stepping in to disrupt the idea of what a protein bar is through the creation of its product called a SOUND Bite.

Roberto Capodieci, the CTO of Sound Nutrition, invented the technique of ultrasonic cutting as a way to eliminate waste in food production for a major snack manufacturer.

Later on, he discovered this technology could be used to gently vibrate dry ingredients into a shape without the use of high heat. Now, this is what Sound Nutrition uses to shape its powdered ingredients into an oval-shaped bar.

A lifelong inventor with 30+ food patents to his name, Roberto’s first breakthrough in ultrasonics only sparked more invention, but these bold ideas didn’t always match up with the business priorities of the large corporation he worked for at the time.

When he developed a new use of ultrasonics that could gently vibrate dry ingredients into a shape without the use of high heat, he knew he’d found his greatest achievement — a technology that could change food production forever. He decided to leave the company to fully pursue this new discovery – with the help of new investors and colleagues.

The benefit to using sounds waves to form the bars, he says, is that no fillers or binders are needed ie the likes of dates or brown rice syrup that are found in other bars.

He asserts that this technology also affects the texture of the ingredients, and provides a rich, buttery flavour. Because the bars are never baked or heated, this supposedly also preserves the nutritional quality and tatste of the ingredients.

Different protein isolates, like soy or whey, are commonly incorporated into protein bars, but Sound Nutrition uses whole egg crystals and cream cheese powder instead to up the protein content.

Rather than added natural or artificial flavours, ingredients like lime juice powder, ground vanilla, and raspberry powder are used to create the different variants. Each bar contains only 1 gram of sugar, and the only sweetener used is allulose, a sugar-free sweetener.

SOUND Nutrition officially launched a few months ago, and its bars are currently available for purchase only on its website. SOUND Bites come in packs of two, and each pack is available in a case of 12, costing $72.