Posted at Thursday, May 5th, 2011 h in Functional Foods by admin 0 Comments

An innovative new range of functional beverages, born and realised in Cape Town, has been winning international attention and plaudits. Introducing Stream Drinks…

MOVE OVER VITAMINWATER, here comes Stream Drinks! That’s the lofty ambition of the team behind this new functional range of beverages – and if their first steps on the international stage are any indicator, they could indeed be on to a winner.

So, what are Stream Drinks?

This new lifestyle drink is a mineral water-based functional beverage that incorporates natural plant extracts, nutritional additives and an innovative delivery system. It contains no sugar, preservatives and is very low in calories.

Stream utilises a unique packaging delivery system, whereby the vitamins, minerals, plant extracts, and other healthy ingredients are stored in the bottle cap. On purchase, the consumer punches the cap to release the contents and then shakes it up to mix them into the water to deliver a healthy and fresh thirst quencher. This means the final product is as fresh as possible, experiencing minimal deterioration or oxidation of ingredients from the elements and transportation.

Stream’s genesis, as it often the case with bright new ideas, was prosaic. After an evening surf, Cape Town medical doctor and avid surfer, James Laporta, stumbled, exhausted, from shop-to-shop scanning the shelves for anything “healthy” to drink on his way home. The simple trip sparked the idea for a health drink revelation. “Something without sugar, without guilt, something that felt ‘health-giving’ and was worthy of a healthy label,” is how he describes it.

Through word of mouth and a strong passion for the doc’s bright idea, a team of five, helped along by the backing of two capital investors, have subsequently come together to develop and launch the Stream concept. “The brief was simple, but the task has been immensely complex and the journey arduous, but we believe the end result will be well worth it!” says one-time neuropsychology honours student, now turned Stream marketer, Ryan Dix-Peek. 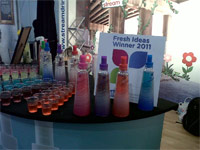 Stream was launched internationally to would-be franchisees and distributors in mid-March at London’s International Food Event trade expo (IFE), and where it won one of IFE’s ten Fresh Ideas Awards, presented to the ten exhibitors with the best innovations.

See more on these awards here

From dream to Stream

The Stream team’s search to turn idea to reality took them to Afriplex, the Paarl-based producer of indigenous and other botanical ingredients, and well-known for its beverage development expertise, and its highly experienced NPD guru, Grant Momple, head of its food and beverage division.

“It has been a challenging eight-month R&D project – with so many complications to unravel,” says Grant. “First, we had to design the range with the appropriate ingredient recipes, flavour and  colour profiles; then we had carefully consider the ingredient dosages and combinations; then there was the tricky issue of making many of these bitter substances taste agreeable – in fact, several have never been used in beverage format; and finally we had to consider their functional performance in terms of dispersability, clouding, non-clumping and so on.”

With James Laporta’s input, and at his insistence, Grant and his team have ensured that all the functional ingredients in Stream are natural, that dosages are safe and at levels that are active and effective. While Stream makes no claim to treatment or cure of any medical conditions, the beverages’ suggested health benefits are all supported by published scientific research.

The secret’s in the cap

Essential to Stream project was that these functional drinks had to deliver what they promised – challenging in a standard RTD beverage as many nutraceuticals have a limited lifespan in an aqueous solution. This little issue finally lead them to the PowerCap, developed by Liquid Health Labs, Deerfield, New Hampshire, US. This dispensing technology is part of a growing trend in caps and closures ie the storage of dry or liquid ingredients inside the cap which are then released into the product upon opening.

The two-tiered bottle cap protects the active dry ingredients from degradation, allowing them to be dispensed by the consumer with a simple push on the top. It increases the shelf life and potency of the ingredients since they remain seperate from the water until the cap is pushed. The PowerCap also makes hot filling and pasteurisation unnecessary, making the bottle required less expensive, and the beverage filling process cheaper and more enviromentally friendly.

“PowerCap allows beverage companies to work with ingredients that they cannot workwith in a standard RTD,” says Grant. “It benefits consumer trust in that they are a part of the beverage development process, and that they are making a product when they need it.”

Stream Drinks, in fact, is looking to extend its business beyond its own products via its securing of the exclusive agency for PowerCap in Africa, Israel, Turkey and the GCC (Gulf States). It will work with Afriplex who will supply the blended bulk ingredients and fill the caps on a semi-automated line it has set up at its Paarl plant.

From a business perspective, the PowerCap makes great sense, adds Ryan: “The production process is greatly simplified for our future franchisees and other PowerCap customers. They can make up their water-based beverages wherever it suits them; we will just ship the filled caps – and thus no expensive transportation of liquid.”

And still with packaging, the Stream team has gone a differentiation step further by ensuring that its caps top a proprietary 355ml bottle. Of attractive, ergonomic sloping design, it is the work of Hilfort in Cape Town, while the shrink label is by Ferroprint.

It’s all well and cool to have developed and launched a sexy new product, but what about its sales prospects? The Stream team believe they’re, well, streaming and steaming.

“Stream was a great success at the IFE show in London. It drew amazing reaction and we’ve secured several orders from international distributors and retail outlets and the keen interest of potential franchisees. We’re ready to rock the EU/UK!” says Ryan. “Our PR team in the UK is working on an interesting launch campaign, including celebrity stunts, guerilla marketing at shopping centres and several other below-the-line ideas.”

At home, Ryan says they intend to be a mainstream retail presence, but are starting out slowly with trial marketing via vida e caffe outlets in Cape Town. “The opportunity to get into vida e caffe happened per chance and at the right time. This is a good pre-launching platform going into the winter period. Hopefully the trial will see the spread of Stream drinks into the rest of their stores very soon. Overall, we hope to be nationwide by the end of the year. ”

Osumo health food chain in Cape Town has also taken Stream into its stores. “We find a very good fit with Osumo from a quality and balanced food and drink perspective – our brands complement each other well,” says Barry Cooke, fellow director of Stream Drinks.

“We are taking the view to not outgrow our consumers right at the beginning,” he stresses. “We would rather grow Stream at the pace where our original consumer base will identify with our brand and to be a part of this exciting new era in healthy lifestyle drinks; with fun drinks that take health seriously.”

“From an ingredients and innovation perspective, we obviously feel very optimistic. People are becoming very aware of what is on the shelves and what they need to consume to maintain a healthier lifestyle. Once we make the move to be in mainstream distribution, we hope that the fun, trendy and healthy vision of Stream is in the mind of the market and we can grow from there.”

XStream (Tropical Flavour): An energy boost formula with extracts in the form of a tropical flavoured guarana and ginseng combo, enhancing energy and mood levels.

LoveStream (Blackcurrant Flavour): A mix of buchu and blackcurrant-containing buchu extracts, ginseng and a super dose of zinc, heightening the five senses and “keeping the fun going all night long”.

Currently doing his community service stint at a hospital on the Cape Flats, Dr James Laporta has developed a keen interest in complementary and nutritional medicine, over and above his formal medical studies. He is also involved in various NGOs  and community work. His desire to continuously learn and develop his knowledge and skills as an integrative medical practitioner is central to Stream Drinks’ ethos and growth as a brand.