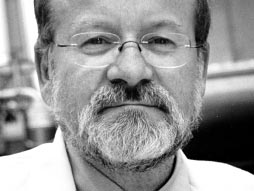 Posted at Wednesday, May 18th, 2011 h in Food Science, Technology and Ingredients Stuff by admin 0 Comments

Did you know you have functioning neurons in your intestines – about a hundred million of them? Senior Nestlé food scientist, Heribert Watzke, talks about about the “hidden brain” in our gut and the surprising things it makes us feel.

Heribert Watzke set up the department of food material science at Nestlé in Switzerland, pulling together many disciplines, including chemistry, nutrition and neuroscience, in pursuit of ever better foods. Watzke’s background is in chemistry — in the mid-’80s, he was part of a groundbreaking team at Syracuse working on splitting water into hydrogen and oxygen to create alternative energy — before moving to materials science.
At Nestlé’s lab, Watzke focuses on the most basic form of human energy: the chemistry of food. Research on food has previously focused on its sensory qualities – taste, aroma, texture. But there is much more to know.

His team has been looking recently at the impact of food structure on fat digestion, in support of the fight against obesity. How much fat is needed to feel full? And how can we most effectively communicate with the 100 million neurons in our gut?