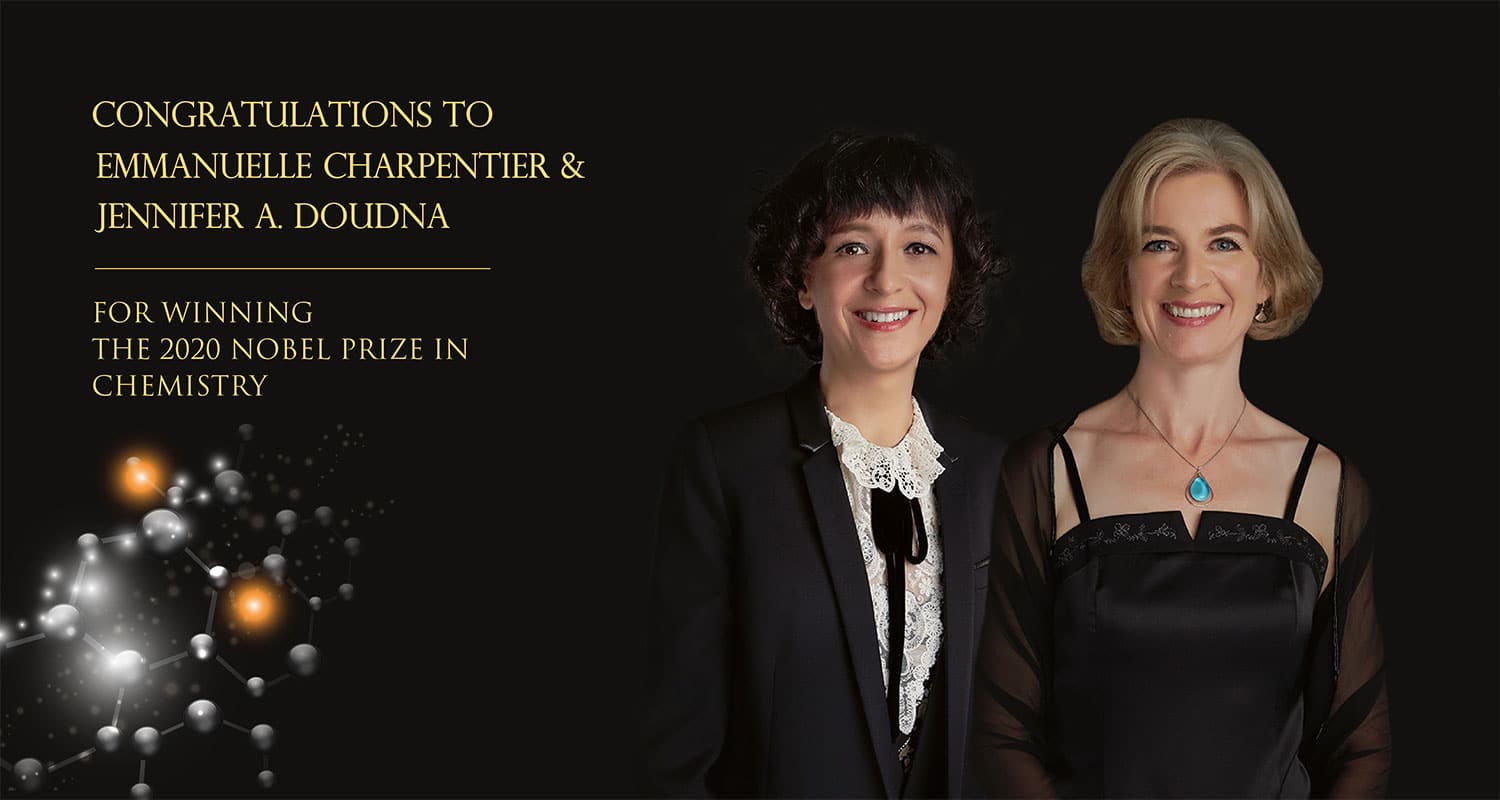 The 2020 Nobel Prize in Chemistry has been awarded to the two scientists who discovered and refined the CRISPR/Cas9 gene-editing tool. One of the most important scientific breakthroughs of the last decade, CRISPR allows for relatively simple editing of genes and could revolutionise medicine, agriculture and other fields.

Emmanuelle Charpentier, director at the Max Planck Institute for Infection Biology in Germany, and Jennifer Doudna, professor of biochemistry at the University of California, Berkeley, US, are the joint winners of the Nobel prize in chemistry 2020 for the development of a precise method of editing genomes.

This is the first time two female scientists have won the prize, which amounts to ten million Swedish kronor (£861,200) and will be shared equally between the laureates.

The genome of an organism is a dynamic instruction book that not only contains the blueprint for how to create it but also physically controls various processes. This is in the form of DNA which is housed in the largest compartment of the human cell: the nucleus.

The CRISPR/Cas9 genetic scissors developed by the Nobel laureates is a type of molecular tool that can edit DNA by cutting and pasting sections of it. It allows scientists to precisely change any chosen letters in an organism’s DNA code. The seven-year-old technology has already revolutionised several areas of biotechnology and biomedical sciences – a rare occurrence in this scientific field.

Charpentier discovered a previously unknown molecule, tracrRNA, when she was studying bacteria known as Streptococcus pyogenes. She realised that this molecule was part of the bacteria’s immune system, known as CRISPR, where it would kill viruses by cutting up their DNA.

Doudna and Charpentier then collaborated to recreate this tool in a test tube, so it could be applied to any genome. This involved developing methods of reprogramming and simplifying it using elegant experimental systems.

CRISPR/Cas9 offers to bring enormous benefits to humans in various ways. For example, it could be used to create designer immune cells with enhanced abilities to seek and attack tumours. It could also help develop gene drives, genetic modifications designed to spread through a population at high rates of inheritance, to control mosquito-borne diseases such as malaria, dengue fever, yellow fever and Zika.

Excitingly, it even raises the possibility of bringing back extinct animals Jurassic-Park style, and creating greener energy by boosting lipid production in algae that can then be used as biofuels. The list is endless.

Amazingly, the ever expanding CRISPR toolbox allows researchers to introduce about 13 different changes in a single gene, offering a real chance of eradicating many inherited diseases. Before CRISPR, creating just a single change in a gene was complex and cumbersome, making it nearly impossible for many laboratories around the world to apply it in their research.

As leader of the Genome Engineering lab at the University of Westminster, I am delighted to be a part of the CRISPR scientific community generating cellular models to understand biological pathways of human diseases.

In just eight years, CRISPR has shown promise in treating a whole range of diseases, such as cancer, HIV, muscular dystrophy, certain forms of blindness, and even aging itself. Human trials are already underway, with early results proving exciting. The tool could also be put to work making hardier or more nutritious crops, for chemical-free pest control, and for creating new designer bacteria that can perform a whole range of fascinating new tasks.Nobel Prize organisation

That said, several questions about this tool remain to be answered. Due to its simplicity, the science of CRISPR is developing at a faster speed than the ethics for regulating its application. For example, when this technology is applied to “germ cells” – sperm and eggs – or embryos, it changes the germline. That means that any genetic changes it achieves will be passed down to future generations.

Research on germline genome editing therefore remains illegal in many parts of the world. But it has proven difficult to police. Chinese scientist He Jiankui shocked the world in 2018 when he announced that he had created the world’s first gene-edited human babies.

There is therefore an increasing need to understand the real science behind this splendid tool. It will need continuous conversation among scientists, policy makers and general members of the public to make sure it is used for the betterment of humankind.

The journey in science feels wonderful when one gets an opportunity to encounter great scientists. It has been a privilege to meet Doudna, a scientist as simple and elegant as the tool she co-developed. Even after a lengthy talk at the Royal Society’s CRISPR revolution: changing the life conference in 2018, she continued to patiently answer questions from the curious crowd with a smile. She is a great role model that could inspire a new generation of female, as well as male, scientists.

I believe CRISPR has not only rewritten the genetic code but also the future. Thanks to the hard work by 2020’s chemistry Nobel laureates we no doubt have plenty of life-changing discoveries to look forward to in the next decades.