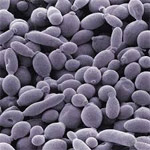 For the first time, researchers have successfully engineered a strain of baker’s yeast capable of spewing out malaria drugs on an industrial scale. The French pharmaceutical giant Sanofi has already begun brewing the microbes and announced plans to generate 70 million doses this year.

The advance is the result of a 10-year odyssey in synthetic biology, the wholesale engineering of an organism’s genetic and metabolic system for practical purposes. Amyris, the biotech startup that engineered the yeast strain, is also developing microbes to produce fragrances and other high-value chemicals.

“This is the first synthetic biology project that has been scaled up to industrial manufacturing and will have a real impact in the world,” says Jack Newman, chief scientific officer at Amyris. “There should never be a shortage of artemisinin ever again.”

Amyris had already engineered yeast capable of producing artemisinic acid, the precursor to the drug. But the most recent advance, published in Nature, dramatically improved the yield from 1.6g to 25g per litre.

The improvement primarily comes from the discovery of three key enzymes in sweet wormwood, the plant that naturally produces artemisinin, which researchers then introduced to yeast.

Artemisinin is the primary ingredient in artemisinin combination therapies, the World Health Organization’s preferred malaria treatment. But because the drug is primarily derived from plants, its costs can vary from $350 to $1200 per kilogram of the active ingredient.

“The botanical supply is inconsistent for various reasons, including weather and incentives for farmers,” says Ponni Subbiah, global program leader for drug development at OneWorld Health, an NGO that funded the research through a grant from the Gates Foundation.

The synthetic process can run year round and takes about three months, compared to 15 months for plant-based methods. “Our aim is to stabilise the supply independent of the plant supply,” says Chris Paddon, who leads the artemisinin project at Amyris.

OneWorldHealth has licensed the technology to Sanofi, which has already produced nearly 40 tons of the artemisinic acid. (The acid is then chemically converted into artemisinin.) Sanofi aims to produce 60 tons of the material next year —approximately 120 million courses of treatment — and has pledged to sell it without profit.

Some are concerned that introducing the synthetic version to the market too quickly might actually be disruptive, discouraging plant-based production. However, at a malaria conference in Nairobi in January, Sanofi said it will introduce its product at the lower end of the market range, with the goal of smoothing out price fluctuations rather than elbowing out other producers. Sixty tons of the drug would meet about a third of the world’s supply, says Subbiah.