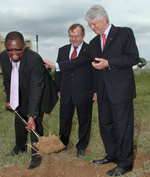 In a huge thumbs up for SA’s food industry prospects, Nestlé this week turned the first sods of two new greenfield factories in Babalegi, near Pretoria. As the world’s biggest food group sharpens its focus on emerging markets, Nestlé is spending R505-million on a three-pronged expansion of its business in South Africa.

Half of the amount will be spent constructing a factory to make Milo and Cheerio cereals that have proved a hit with local consumers. Within a year of being launched two years ago, imports of both brands had cornered 10% of the South African cereal market, Nestlé South Africa spokesman Ravi Pillay said. “Demand has been so great (as to) justify setting up a factory,” he said.

The cereal factory, to be built on 16 000m² in Babelegi, Pretoria, at a cost of R244m, would employ 70 permanent staff and 100 workers indirectly in the construction phase. The site is adjacent to Nestlé’s Cremora factory, enabling shared services.

Another 160 permanent jobs and 200 construction jobs are expected at an adjacent Maggi factory, also under construction at a cost of R155m to produce noodles and other unspecified brand products.

Pillay would not disclose the full range of Maggi products, citing competitive reasons, “safe to say they will be within our strategy of popularly positioned products”, affordable in price and size.

Regarding the nutritional content of the products in which Nestlé was investing, Pillay said that breakfast cereals in general contained between 3% and 10% of a person’s daily recommended sugar allowance.

“We provide a range of cereals with varying sugar content to meet consumers’ varied preferences and have reduced sugar content in recent years,” he said. Between 2003 and 2010, Nestlé worldwide had taken more than 7 000 tons of sugar out of its cereals.

Asked if this was an admission that Nestlé’s sugar content was too high, he said: “The mere fact we are making an attempt to reduce sugar content is in line with our multinational health and wellness platform – we are doing the right thing to help with kids’ nutrition.”

According to Pillay, Nestlé was actively encouraging local procurement across the entire supply chain, from agriculture to packaging, to create a market for local businesses and emerging farmers.