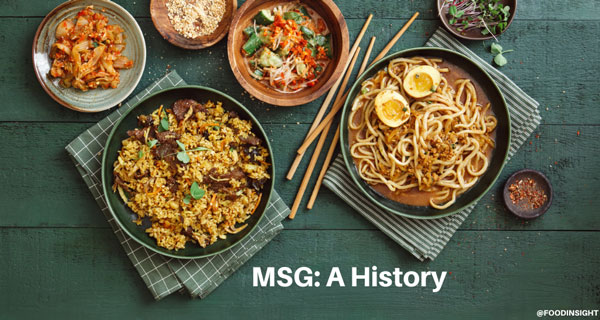 Ridiculously, MSG is still widely believed to a no-no in food… here’s a measured new article that outlines its history, safety and usefulness…

Monosodium glutamate (MSG) is a flavour enhancer that gives foods a specific savoury taste that is also known as “umami.”

Although MSG is found naturally in some foods, such as tomatoes and certain cheeses, it wasn’t until the early 20th that MSG was discovered by Kikunae Ikeda, a chemistry professor at the Imperial University of Tokyo. The legend goes that Professor Ikeda was eating soup when he noticed that the broth tasted better than usual. Upon inspection, he realised the enhanced taste was due to the addition of kelp, and he was inspired to begin studying its chemical structure.

By 1908, Professor Ikeda had determined that the savoury taste was due to L-glutamic acid (glutamate), a nonessential amino acid. When glutamate was combined with sodium, the substance became known as MSG.

In 1909, Professor Ikeda filed a patent to produce MSG commercially. It was subsequently developed as a product that entered the food supply as a seasoning and today is a popular food additive and is produced from fermenting starch, sugar beets, sugar cane, or molasses.

Although MSG is odourless and tasteless by itself, when it’s added to foods it brings out those special brothy or meaty umami tastes. The flavour has been deemed so enjoyable that “umami” was named after “umai”, the Japanese word for “delicious”.

The enjoyment can be broken down chemically: When MSG is eaten, the sodium and glutamate break apart in the saliva, and the free glutamate activates the umami taste receptors, creating that especially satisfying and savory flavour.

The US FDA permits the use of MSG in the food supply under Generally Recognized As Safe (GRAS) criteria. To be considered GRAS, substantial research and expert review needs to show that a food additive is safe for consumption under its intended use.

Although some people consider themselves to be sensitive to MSG, these personal findings have yet to be supported by robust medical evidence. However, there have been anecdotal reports of people experiencing side effects after MSG consumption — including allergic reactions, drowsiness, headache, nausea, palpitations, and more — so some people remain skeptical about the use of MSG and avoid it as an additive in their diet.

The most notorious, negative review of MSG occurred in the 1960s, when a physician reported getting sick after eating Chinese food and attributed his symptoms to either alcohol, sodium, or MSG. He wrote a letter to The New England Journal of Medicine, and his story sparked an outrage against MSG.

As a result, hypersensitivity to MSG wrongly became known as “Chinese Restaurant Syndrome,” which is now more properly referred to as “MSG symptom complex”. Unfortunately, significant damage was done to MSG’s reputation, and the initial association with Chinese food spread misinformation and perpetuated racism against Asian-American citizens.

The current research shows that there is no strong scientific evidence that links MSG consumption to these reported side effects. Many studies that have been done on MSG have major flaws, including a lack of control groups, small sample sizes, unrealistic MSG doses, and more.

Although negative associations with MSG still exist today, there are potential benefits to consuming MSG. In fact, most of the glutamate we consume is found naturally in nutrient-dense foods, such as anchovies, Parmesan cheese, dried and fresh tomatoes, potatoes, seaweed and walnuts.

It’s estimated that less than 10% of the glutamate we consume comes from the crystallized MSG that some people add to food instead of salt. Both salt and MSG add flavour, but MSG contains about three times less sodium than the same amount of table salt, so using MSG in lieu of table salt can help reduce sodium intake.

Many people are advised to limit their sodium intake due to the connection between excess sodium intake and various diet-related chronic diseases, such as high blood pressure — so MSG can be used as a tool to reduce sodium without compromising flavour.

Although many enjoy MSG’s flavour today, the history of MSG is a prime example of how misinformation about the foods we eat — their ingredients and their origins — can create and spread stigma and misperceptions about other cultures for generations.

In contrast, responsible, respectful, and repeated communication of public health information that is rooted in science can be a first step toward righting past wrongs — especially in the case of MSG.