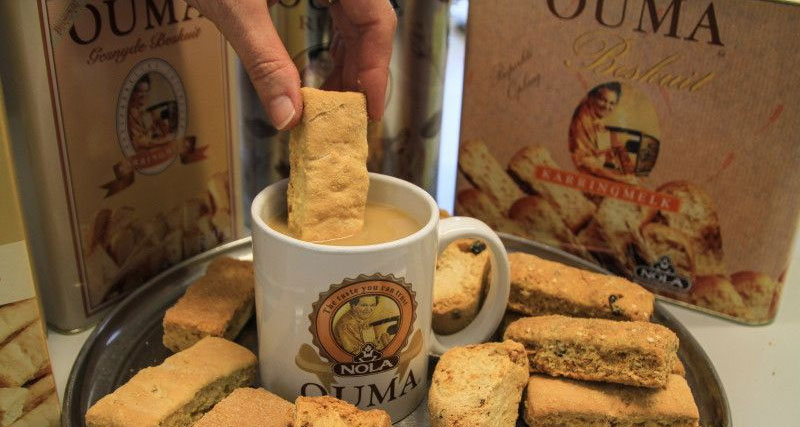 04 Oct 12 Molteno: A town saved by Foodcorp and Ouma rusks

We reported earlier how a private-public partnership between Foodcorp and the local municipality has saved the historic Eastern Cape town of Molteno. The company has now issued a press release expanding detail on this heart-warming story.

When Elizabeth Anne Greyvensteyn first started selling rusks to her local community over seventy years ago, it would have been hard to imagine that her humble business would grow to become one of South Africa’s most iconic brands. Now employing over 250 people, the Ouma Rusks factory in Molteno is the lifeblood of the town’s small economy, owned by South Africa’s third-largest food producer Foodcorp.

Founded in a community struggling to combat the effects of the Great Depression in the late 1930’s, now the stuff of legend, Ouma Greyvensteyn and her friends each invested half a crown to help fund local mission work. Greyvensteyn put her renowned baking talents to good use, selling rusks to the community. Soon, the demand for her delicious biscuits outweighed her ability to supply them, kick-starting what would eventually become a formal family business venture.

Oom Sam Prinsloo, (94), fondly recalls: “I will never forget – the Greyvensteyn family bought a small motor car – a Singer – which they modified to deliver biscuits to the town and the train station, to be sent to places like Queenstown or wherever they got orders from. It started giving them hassles in the end and they had to get a little van which was extremely primitive and then they eventually started to expand the business with larger trucks. They started out from nothing though.”

South Africa’s coldest town in winter, Molteno today has an unforgiving climate and scant opportunities for poverty-stricken local residents, most of who are directly or indirectly supported through the Ouma Rusks factory. Embraced on either side by high Karoo plains and semi-arid vegetation, Molteno’s run-down high-street, with prerequisite church and liquor store, is reminiscent of another era.

One might imagine that not much has changed here since the arrival of the early pioneers who founded this tiny frontier town on the promise of coal fields in the late 1800’s. Profoundly, South African artist Johannes Meintjes christened Molteno “The town of dreams” in his 1974 book chronicling both the town’s history and expansion plans which, sadly, never came to pass.

In 2011, Molteno’s proudest heritage and largest employer came under threat. Foodcorp carried out a structural assessment of the forty year-old Ouma Rusks factory roof which, it was discovered, urgently needed to be replaced. To avoid disrupting production over the several months it would take to repair, Foodcorp needed to erect a new building adjacent to the old one, at a costly price tag of approximately R47-million.

The factory had previously been plagued by inconsistent electricity supply and poor quality municipality-sourced water which was not sufficient for food manufacturing. This left Foodcorp with no choice but to rely on borehole water to keep the factory going. This precious water supply has come under increased pressure in recent months due to its proximity to the town’s cemetery, which legislation stipulates requires a separation of at least 1.5km.

To compound these operational challenges even further, access roads into Molteno are riddled with potholes and frequently snowed under in winter. There had previously been no proper grading facilities available, resulting in major disruptions to the factory production line during annual snowfalls, sometimes causing week-long delays. The disadvantages of running the Ouma Rusks factory from Molteno soon began to outweigh the advantages.

Justin Williamson, CEO of Foodcorp, says: “Moving the factory to Randfontein would have made more financial sense for the business, but we knew that doing so would have a devastating impact on the local community. We felt a strong social obligation to remain in Molteno. We have always been highly cognisant of the vital role that the Ouma Rusks factory plays in creating employment in the region but we could no longer carry on alone. We needed to get local government onboard in order to continue operating from the town.”

After lengthy negotiations spanning several months, an extraordinary partnership between the Eastern Cape government and Foodcorp has subsequently been born. Years of work were achieved in mere months as government set to work convincing the necessary stakeholders to invest in a water purification plant in the area.

Government eventually agreed to negotiate with Eskom to supply electricity directly to the factory, the connection costs of which will be covered by the local municipality. A tender has been put out by the Amatola Water Board for the construction of a water purification plant in the area, worth R2-million, and the department of Public Roads has agreed to station a grader at the Molteno municipality during the harsh winter months to deal with heavy snowfalls.

The result is an extraordinary R46-million investment by Foodcorp into the construction of an 8000m2 factory adjacent to the existing site on the outskirts of Molteno, projected to increase daily production capacity from 16 to 23 tonnes. By 2013, when the new factory opens, capacity will have increased by a significant 43%.

The duration of the project is expected to last ten months in total, with fulltime production in the new factory tipped to start from March 2013, after a phased cross-over from old to new. In addition to saving the existing jobs created by the Ouma Rusks factory, building contractors have employed an additional 15 local labourers on-site during the construction period.

The old factory will be used as a warehouse to store raw materials and finished products. A few of the many benefits associated with the new factory will include better working conditions for employees thanks to better insulation, natural airflow and light. The new production facility will also enable the factory to achieve HACCP certification in line with the Foodcorp policy.

Local residents, proud of the Greyvensteyn heritage, are all too aware of what the factory’s closure would mean for the town.

Linda Erasmus, owner of bed and breakfast Era, is conscious of her small business’s dependence on the factory’s continued operations: “The Ouma Rusks factory is like a lifeline to Molteno, when you think of all the people working there and all the people who have come and gone before them. If the factory was ever to shut, it would force the closure of the entire town. If you think of the number of people employed by Foodcorp in Molteno and the people who they in turn are feeding in terms of extended families; that would be disastrous for our town. A total shut down.”

A new chapter seems to be on the horizon for Molteno, with further investment tipped to be made in the region. Traditionally an agriculturally-rich district which provides mutton stock for the broader province, the Inkwancwa municipality is now being explored by local government as a possible destination for wind and solar energy generation.