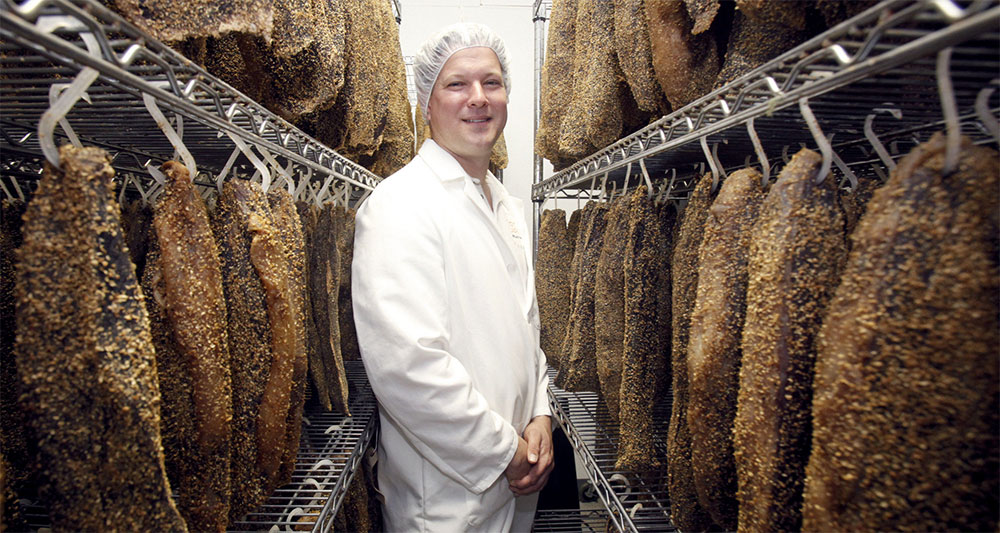 Growing up in Springs, Pala never imagined he’d become the ‘Çhief Biltong Officer’ in the US – he now heads manufacturing at Stryve, which has about 75% market share in the US biltong trade. It’s a fast-growing business – biltong sales in the US grew by 500% in 2019.

A Rhodes University graduate with an IT degree, Pala consulted for large accounting firm Arthur Anderson and was offered the chance to relocate to the company’s New York office. He jumped at the opportunity and moved there in 2001.

“I loved America but there was one problem – there was no biltong,” he told Business Insider. “I tried beef jerky, but to me it just tasted like old car tyre with spices.” While also dried meat, jerky differs from biltong in that it is usually made from very lean meat, it is sometimes smoked and vinegar isn’t used at all.

Dusting off an old family biltong recipe, Pala soon found himself making biltong in his New Jersey garage, but the freezing winters and humid summers in the north-eastern United States posed a bit of a challenge.

But soon he figured out how to replicate the hot, dry weather conditions of South Africa, and soon friends and members of the Springbok Club of New York and New Jersey, a social club for South African expats, began placing orders for his homemade biltong.

Being a serial entrepreneur who paid his university fees by selling boerewors rolls, Pala soon realised he’d inadvertently discovered a unique business opportunity. The American market was vast, had a taste for meaty snacks but was unfamiliar with biltong. The result was Braaitime, a company specialising in South African foods, which he founded with his Zimbabwean-born wife, Nicholle Pala, in 2005.

For the next two years he worked as an IT consultant in Manhattan, which included stints at Merrill Lynch and Bloomberg, selling biltong in his spare time. With his garage getting cramped he relocated to a 300-square-metre facility in Keansburg, New Jersey, which allowed him to ramp up production. But he soon hit a potential stumbling block – in the form of a visit from the US agriculture department.

“Suddenly one day in late 2007 I had a visit from a man with a gun and a badge who told me I wasn’t allowed to be doing what I was doing,” he says. “It was a field officer from the US Department of Agriculture (USDA). He wanted to know if I had the requisite permits but the problem was they’d never heard of biltong, so it wasn’t entirely clear how to categorise it.”

With a full-time job and a growing family to feed, Pala realised he had to decide whether to invest in his biltong venture full-time or remain in the corporate world. In the end, he chose biltong.

He invested heavily in achieving full USDA compliance, which included installing a triple stack air handing system and paying for a USDA officer to spend one day a week at his facility, a regulatory requirement. Still, he could only afford to do that for one day a week, which meant working the remaining four days as a consultant, making biltong on Fridays, and doing deliveries on weekends.

“Once I had USDA approval it allowed me to white label manufacture for other US biltong producers,” he says.

As the only USDA approved biltong manufacturer in the US at the time, he was soon producing for small brands across the country. When the 2008 financial crisis began to bite, Pala found himself with some extra time on his hands and decided to dedicate most of it to his burgeoning biltong business.

By improving efficiencies, he was able to ramp up Friday production and spend the remaining four days of the week offering free biltong deliveries.

“I used to load up my van with biltong, take the Holland Tunnel into Manhattan and then park in midtown,” he says. “Then I’d load the biltong into a crate on the back of my bicycle and ride around Manhattan delivering it in person so I could tell customers about the product.”

Soon Pala was selling biltong full-time. His next challenge was to invest in a scientific challenge study to prove that the biltong manufacturing process could create a “shelf-stable product” – a product that can survive long periods at room temperature without spoiling.

“Proving that the product is shelf-stable and free of pathogens has given us a lot of credibility in the American market,” he says.

All this paid off in 2018 when he was approached by Stryve Foods, a company founded by former NFL player Gabe Carimi; the founder of nutritional and bodybuilding supplements company, Ted Casey; and Joe Oblas, who founded sports nutrition company Prosupps.

The three were attracted to biltong due to its status as a high protein preservative-free snack with zero sugar content. Pala sold Braaitime to Stryve and now works for the company as head of manufacturing, or Chief Biltong Officer as he is affectionately known.

Stryve, which has about 75% market share in the US biltong market, says biltong sales grew 500% in the country last year. “Our goal now is to get biltong into every American home,” says Pala.