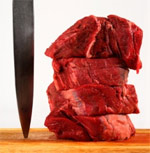 04 Apr 13 Meat scandal: Retailer names to be handed over

The names of retailers whose meat was sampled to determine its actual ingredients will be handed over to the Red Meat Industry Forum and Media 24, according to reports today.

The University of Stellenbosch told Business Day it would comply with the request by the forum and Media 24 despite the wishes of researchers to keep the information confidential.

University senior research and innovation director, Therina Theron said the purpose of the study was not to “name and shame” meat processors and retailers.

“For these reasons, the sources of the test subjects were not put into the public domain by the researchers,” she was quoted as saying. “However, unfortunately the recent requests for this information received under the Promotion of Access to Information Act (PAIA) leave Stellenbosch University with no alternative but to make the detailed information available.”

The dispute pits the public’s right to access information held by a public institution against the right of scientists to unphold the independence of their work.

However, legal advice obtained from two advocates concluded that the university as a public institution was obliged to provide the data. The meat study, which was conducted by the university, found traces of donkey, water buffalo, goat meat and soya in products that were incorrectly labelled.

In an interview with Cape Talk/Radio 702, Dr Harris Steinman of FACTS, a co-author of the SU study, reiterated the researchers’ unhappiness with the ruling, saying release of the names would unfairly name and shame a select number of vendors, when this was not the intention of the snap-sample research and would tarnish the whole industry with the same brush.

Further, there was no distinction between inadvertent trace contamination of some samples versus deliberate contamination aimed at misleading the public.

He also made the points that the data was now over eight months old, and the companies involved had already remedied the situation. Most importantly, he said, the release of names could jeopardise future research as companies would be unwilling to participate in studies if they risked negative public exposure, financial loss and possible prosecution.