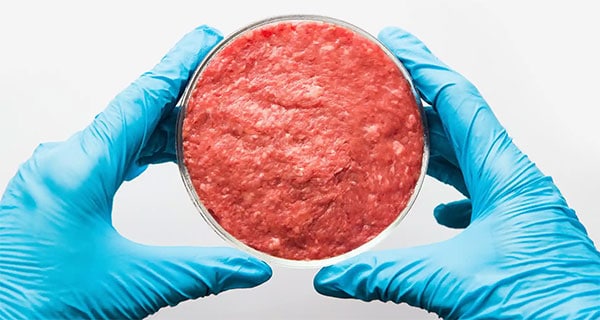 If cellular agriculture is going to improve on the industrial system it is displacing, it needs to grow without passing the cost on to workers, consumers and the environment. [A provocative long read… Ed]

Americans will eat about 2bn chicken nuggets this year, give or take a few hundred million. This deep-fried staple is a way of profiting off the bits that are left after the breast, legs and wings are lopped off the 9 billion or so factory-farmed chickens slaughtered in the US every year.

Like much else that is ubiquitous in contemporary life, the production of nuggets is controlled by a small group of massive companies that are responsible for a litany of social and ecological harms.

And, like many of the commodities produced by this system, they are of dubious quality, cheap, appealing and easy to consume. Nuggets are not even primarily meat, but mostly fat and assorted viscera – including epithelium, bone, nerve and connective tissue – made palatable through ultra-processing.

As the political economists Raj Patel and Jason Moore have argued, they are a homogenised, bite-size avatar of how capitalism extracts as much value as possible from human and non-human life and labour.

But if chicken nuggets are emblematic of modern capitalism, then they are ripe for disruption. Perhaps their most promising challenger is a radically different sort of meat: edible tissue grown in vitro from animal stem cells, a process called cellular agriculture.

The sales pitch for the technology is classic Silicon Valley: unseat an obsolete technology – in this case, animals – and do well by doing good.

Intensive animal agriculture, which produces nuggets and most of the other meat that Americans consume, keeps the price of meat artificially low by operating at huge economies of scale, and shifting the costs of this production on to people, animals and the planet.

The industry deforests the land, releases hundreds of millions of tonnes of greenhouse gases every year, creates terrible working conditions at abattoirs, and necessitates abhorrent animal treatment on farms, all while engaging in price fixing, lobbying for environmental and labour deregulation, and pushing for unconstitutional anti-whistleblower laws.

The problem is that people love eating meat, with global production and consumption growing steadily, and little sign of a collective vegan epiphany on the horizon.

This makes intensive animal agriculture a wicked problem: something so obviously detrimental, and yet so politically and socially entrenched, that it is unclear where reformers should even start. Cellular agriculture, however, seems to offer a potential socio-technological hack: it could eliminate much of the damage that system causes, without requiring consumers to give up meat.

Long the stuff of science fiction and philosophical musing, cellular agriculture is fast becoming a reality.

But the entire animal kingdom is ripe for replication. The first cellular agriculture prototype presented to the public was a burger patty created by a research team at Maastricht University in 2013. The company that grew out of that project, Mosa Meat, is now speeding toward market release of cell-based beef.

Aleph Farms, an Israeli startup, has 3D printed a cellular ribeye steak. Shiok Meats of Singapore is cultivating shrimp without the shrimp. Berkeley’s Finless Foods is tackling the endangered bluefin tuna. And Australia-based Vow wants to diversify beyond the most commonly eaten species to zebra, yak and kangaroo.

Most of this development is being carried out by a fast-multiplying number of startups clustered in the world’s tech hubs. They are supported by a global network of ultrawealthy investors and venture capitalists who have ploughed more than $7bn into alternative proteins over the past decade, including about $900m into cultured meat.

Richard Branson, Bill Gates and a slew of other billionaires are investors and hype men for the technology; the Maastricht burger was funded in part by Google co-founder Sergey Brin. But major corporations are getting in on the ground floor, with the pharmaceutical behemoth Merck investing in Mosa Meats and the meat giant Tyson Foods buying a stake in Silicon Valley’s Upside Foods.

That private capital is working overtime to disrupt farming with synthetic biology is likely all that boosters and critics alike need to know about the technology. Techno-optimists see a future of widely available “clean meat”, as ecologically and ethically superior to the original as solar power is to coal. Opponents see corporate-controlled lab meat that slots all too comfortably into a broken capitalist food system.

Both sides have some truth to them, but they wrongly assume that the outcomes have been determined in advance.

There was nothing predestined about the forces that drove the food system to ever-intensifying mechanisation, labour exploitation and environmental ruin in the past century; it happened because of political choices, collective and individual.

Similarly, we need not be prisoners of tech monopolists slapping grey “vat meat” on our plates. What we need is an analysis of the possibilities of cellular agriculture – what this novel food technology, with the right policies and investments, could make possible for consumers, workers, animals and the environment.

To grasp the promise and perils of cellular agriculture, we need to understand the system it might change. Our current animal agriculture policies and practices do immense damage, and uprooting them will require enormous collective effort, but history shows that the system can change radically, even in the course of a generation…..